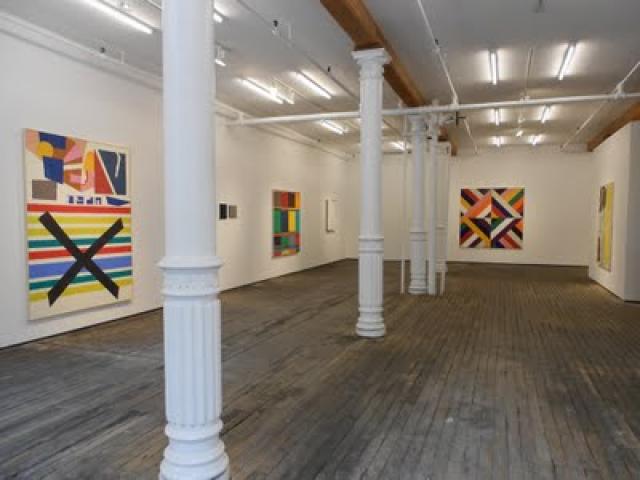 On my way to the Bowery Poetry Club for an Occupy Wall Street poetry assembly, I walked into Zürcher Studio. The gallery attendant told me (in answer to a question) that I was seeing a group show of artists "from the US and Europe." I passed through the room, and when I came to "PME," I thought, "Clearly this is an American painting." But I was wrong. Elle est français. It’s a smallish piece, with few colors, and almost no subject matter. It looks like a snapshot taken by a four year old. (I have several photographs my daughter took when she was 4, which I encounter often. Their composition is pleasingly haphazard; they mostly depict cluttered rooms.) "PME" even has the view-from-below children almost inevitably employ, as photographers. It shows a white truck, a white house, and a big driveway. The paint David Lefebvre used for the truck is quite thick — startlingly gooey.

What do the initials PME mean?, I wonder.

At the recent John Baldessari retrospective in the Metropolitan Museum, one early piece combined 14 photographs of the backs of trucks. The wall text explained that Baldessari believed the rear of a truck resembles a minimalist painting. Maybe Lefebvre saw that work.

"PME" reminds me of my first morning in London, in July, 1986. My wife and I were staying at a youth hostel in Tottenham. (Actually, we were not yet married; we were still a querulous boyfriend-and-girlfriend.) Our first morning, I heard a truck backing up; that annoying repetitive beeping, warning pedestrians away. (Was this the first time I ever heard that sound? Did such mechanisms exist in Europe before they reached New York City?) I looked out at the truck — an English truck, in an English alley. The truck reminded me that I was in a foreign country. I never think of this memory, or half-memory, but "PME" returns it to me.