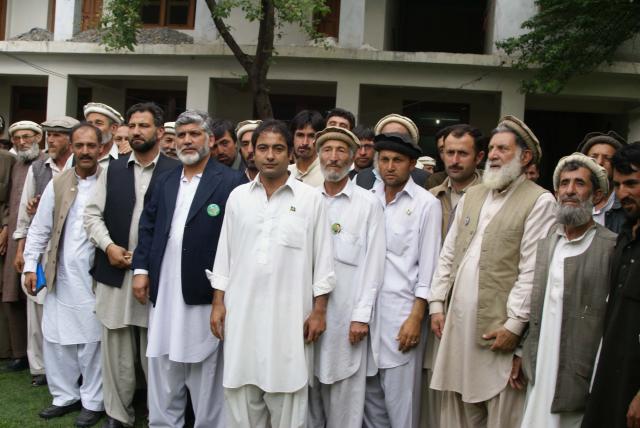 CHITRAL:  Politicians and workers of different political parities joining Pakistan Muslim League N group.  Addressing a huge a press conference at Chitral Press Club  Fazal Rahim Advocate  Muhammad Wazir, Shaukatul Mulk, Kausar Chughtai advocate, Muhammad Younas of PML-N and other said that Pakistani people have determined to cast their vote in favor of PML-N Candidates and next government will be established of PML-N. They said that young generation likes  Mian Nawaz Sharif who will bring revolution in industry and trade at Pakistan. They said Nawaz Sharif is a patriot Pakistani and he love Pakistani nation and after succession in upcoming election he will extend different developmental network even at Chitral level they added. They said that road to Tajikistan and establishment of a dry port is our first priority as well as eradication of unemployment, social injustices also included in our manifesto. They said addressing to a public gathering at Peshawar Nawaz Sharif determined that Chitral will be promoted if their government established in general election. They said that it contradict of a  black propaganda against our leader that he not like Chitral so he specially discussed Chitral in his speech and declared that Chitral will be developed.  Friendship and mutual harmony will be enhanced with neighbors countries at Nawaz regime after 11th May.

They expressed their great concern over candidates of APML at Chitral as All Pakistan Muslim League have boycott from election but the situation is different at Chitral and their candidate still running election campaign. They said that a female advocate from Murree was called here to show her as special envoy of Parvez Musharaf and APML candidates want to mislead Chitrali people by this way to get their votes. They expressed their great grief over sad incidence In which PTI Chief Imran Khan injured. They also offered prayer for his healing and announced cancellation of all of  their political  activities at Chitral following their leader direction. A large number of people from ANP, PPP and other parties joined PML-N.