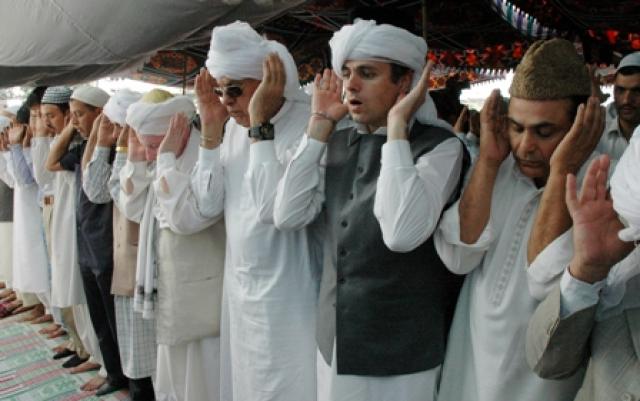 Srinagar/Jammu, September 21(Vijay Kumar)- Marking the end of month-long Ramzan fasting, devout Muslims on Monday congregated at various mosques across the country to offer special prayers on the occasion of Eid-ul-Fitr. Lakhs of Muslims dressed in their festive best greeted each other, exchanged gifts and enjoyed special sweet dishes, particularly ‘sewayian’, made of vermicelli. ‘Eid’, which means happiness or feast in Arabic, is one of the most important festivals of the Muslims who are commanded by the Quran to complete their fast on the last day of Ramadan.

The day was also observed in , where Hindus greeted their Muslim brethren on the occasion.

The Prime Minister, Dr. Man Mohan Singh and UPA, Chairperson, Sonia Gandhi today conveyed Eid greetings to Chief Minister of Jammu & Kashmir Omar Abdullah on telephone.  They also extended felicitations to the people of J&K through Chief Minister and expressed confidence that people of J&K will prosper under the dynamic leadership of Mr. Omar Abdullah. They also expressed the hope that the Eid will be harbinger of peace and development for J&K state.

Meanwhile, Omar Abdullah and Dr. Farooq Abdullah offered Eid prayers at Dargah Hazratbal, where both the leaders were clad with traditional turbans. They prayed for the welfare, peace and betterment of the state and its people.

He exchanged wishes on the occasion and prayed for the peace and prosperity of the state.

Minister of State for Hajj and Aquaf, Mr. Aijaz Ahmad Khan offered Eid Nawaz at a Masjid at Dharmari. He exchanged Eid greetings with the people and prayed for the welfare of the state.

Meanwhile Ex chairman of All Parties Hurriyet Conference and Chief patron of Jammu & Kashmir Ittihadul Muslimeen (JKIM) Maulana Mohammad Abbas Ansari has greeted the Muslim Ummah particularly the Muslims of J&K State on the occasion of Eid ul Fitr. He urged all Kashmiri Muslims for the charity in view of Eid-Ul-Fitr.

Speaking on an Eid Congregation in Jamia Sajjadia, Chattabal Srinagar, Maulana Abbas said that this day is being observed to renew the oath to perform excellent for the sake of Allah and contribute for the suffering humanity. He appealed the people to observe austerity while celebrating Eid-ul-Fitr and demonstrate solidarity with the families of those who lost their dear ones in the freedom struggle and also with those whose relatives are languishing in jails. He reiterated that the toll of Orphans, Widows and destitutes have emerged at a large pace, since the onset of resistance struggle from 1989 and we as Muslims must seize the opportunity to prove a boon to relieve agony and the Aah of Kashmiri sufferers.