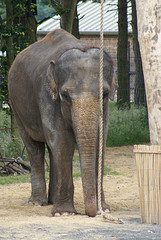 Poaching a threat to Wildlife in Kenya
WANJALA B. DANSON
Wildlife is one of important sources of foreign exchange earned from tourists who visits your National parks and Game reserves. However, a number of tourists touring the country have decreased in past months due to the insecurity issues.
The sector has been shaken by poaching that poses a big threat just like what insecurity is doing to the same industry.  Nine thousands elephants were killed by poachers in past two years according to KWS records.
Furthermore, it is anticipated that if illegal poaching continue at this rate, neither elephants nor rhinos would be inhabit Kenya in twenty years to come.
What will our grandchildren be proud of as Kenyans when the wonders of the world are history in their country? They will read history books just the way we read about early man!
Foreign citizens from Asia are notorious to be masterminds in poaching of elephants and rhinos and providing market for poached goods which are hotcake in Asia.
In addition, Kenyan business tycoons take advantage of poor Kenyans poachers by brainwashing them with little money in exchange for ivory delivered to them.
Poaching has affected foreign and domestic tourists who fear of their security in National Parks and Game Reserves and the situation might lead to extinction of attractive animals that tourists come to gaze at. Foreign exchange will eventually reduce leading joblessness and backwards economic growth.

Wildlife is ingredient of our cultural inheriting. It is used in various national symbols including currency and slogans. Kenyans should not sell it to foreign who are hungry of materials acquired from deceased wild animals.
Kenya Wildlife Service and government have to up their game. Why is it that KWS officers can’t arrest poachers on scene but wait for other security officers to arrest them at the airport?
If the officers are proficient of arrest any common wananchi who kills a small animals like  gazelles for food, then they should be competent to arrest individuals who slay  giant animals like rhinos and elephants which are mountains compared to gazelles .this animals can easily been seen from far .
He appreciates what KWS is doing but that is not satisfactory. They ought to advance their game to break into poaching networks and serve our wildlife.