This is the third printing, from 1934. (My copy was from the Woodstock Library.) The first page says simply: 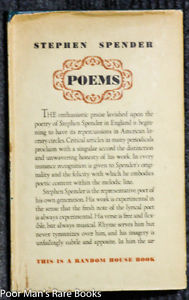 I saw Spender, in the 1970s, when he wintered in Gainesville, Florida, where I lived as a young hippie. I attended two of his readings – which, in my remembrance, were exactly the same. Spender is a classicist; he finds what he wants, and he keeps it.
I remember him being described as “the greatest living poet” – which perhaps he was, as a result of outliving all his contemporaries. These poems are numbered, like Emily Dickinson’s (from 1 to 42). But some of them have titles below the numbers: “The Pylons,” “Van Der Lubbe,” “In 1929,” “Beethoven’s Death Mask,” “The Port,” “For T.A.R.H.,” “The Prisoners” “Perhaps,” “The Funeral,” “The Express,” “The Landscape Near an Aerodrome” “New Year.” Even the titles are grim but elegant. (1934 was HARD.) Spender writes in a semi-backwards way, as if channeling:

Which reminds me – that last line – how the book is suffused with socialism: a Biblical kind of socialism.

He almost always capitalizes the first word of each line.

These poems are songlike; I wonder if any clever young composer ever set the whole thing to music?

The two words I learned from this book: “sicking,” “pennons.”