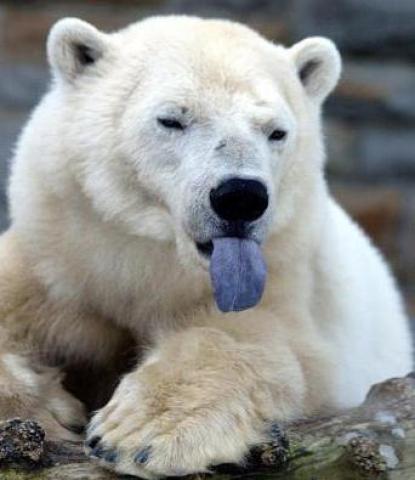 The Interior Department might act soon on its year-old proposal to make the polar bear the first species to be listed as threatened with extinction because of melting ice from a warming planet.

The US administration is nearing a decision that would acknowledge officially the environmental damage of global warming and name its first potential victim: the polar bear.

Both sides agree that conservationists finally have the poster species they have sought to use the Endangered Species Act as a lever to force federal limits on the greenhouse gases linked to global warming and possibly to battle smokestack industry projects far from the .

Federal government scientists have presented increasingly compelling evidence that the top predator at the top of the world is doomed if the polar regions get warmer and sea ice continues to melt as forecast. Two-thirds of the population could be gone by mid-century if current trends continue, experts say. Bears are beholden to sea ice, where they perch so they can pounce on seals, their primary food.

But the energy industry is worried. At least one part of the environmental community believes the bear’s listing would provide the leverage to stop a coal-fired power plant thousands of miles away from the Arctic.

Kassie Siegel, an attorney with the nonprofit Center for Biological Diversity said: “All animals are equal, but some animals are more equal than others. And then there is the polar bear.”

Several conservation groups have filed a lawsuit and threatened a second one to force the listing of the bear. Already, they have sued to nullify oil exploration leases in the Chukchi Sea, arguing that the bear’s plight got short shrift during environmental reviews.

Opposing forces representing the oil and gas industry, manufacturing and property-rights advocates have begun threatening counter-suits over the potential listing. “This is going to be the mother of all test cases,” said Alison Rieser, a lawyer and ocean policy professor at the University of Hawaii.

Filed under: US, World
Share Tweet Pin G Plus Email
previous article: A letter to God from the people of Kenya
next article: “As you sow, so you reap !!”