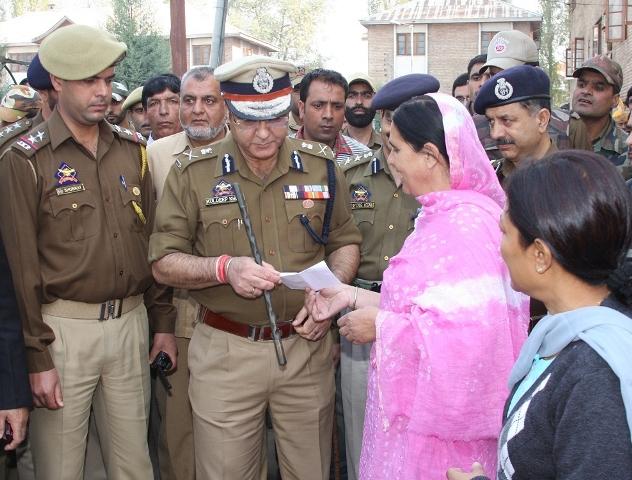 , October 15 (Scoop News) –    The Director General of Police, (DGP), . Kuldeep Khoda today said that living facilities in Police Housing Colonies would be upgraded, besides providing recreation and other modern facilities in these colonies.

. Khoda disclosed this during his visit to Police Housing Colony Bemina this morning. The visit was aimed to take stock of the infrastructure and other basic facilities in the colony. He said that all required facilities including drinking water, power supply, sanitation, medical aid, canteen and schooling for children are presently in place in the housing colony. During the visit he interacted with the inmates and enquired from them about the improvement in facilities being provided.

Later, the DGP convened a meeting in the complex and discussed the problems put forth by the inmates during the interaction. In the meeting, ADGP (Headquarters) s. D. R. Doley apprised the officers about the steps taken by the department to improve basic facilities being provided to the inmates of the colony. She said that during the year the department has sufficed more facilities in the colony by developing a play ground and children park in the complex which could provide more recreation to the children and families of police personnel. The DGP stressed upon the officers present in the meeting to solve all genuine problems of inmates on priority. He also asked to designate a Nodal Officer who should be available within the complex to address the problems of the inmates.

Earlier, . Khoda dedicated newly established recreation hall, computer lab and a gym to the colony inmates. children park and play ground was also commissioned by he DGP on the occasion. He said that the Organization has a proposal to upgrade the housing facilities for he police personnel by constructed more colonies at , and other district headquarters. He said that children of police personnel can take the benefit of computer lab to enhance their knowledge and also can use the play ground and recreation hall during their leisure time. The gym facilities would also help to keep them physically fit, he added