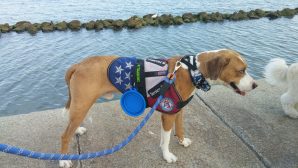 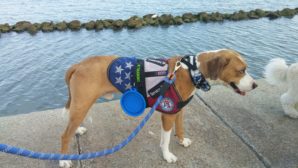 A U.S. Air Force veteran and a Flagler County Sheriff’s Officer will be uniting with service dogs through the Paws of War program. The nonprofit organization rescues dogs, gives them the necessary training, and then pairs them with veterans in need of service pets. The official introduction of the dogs with their caregiver will take place on Wednesday, February 15, 2017 at the Beach Front Grill, located at 2444 S. Ocean Shore Blvd. in Flagler Beach, Fla. The two will receive their service dogs, free of charge, at a special ceremony that will take place beginning at 11 a.m.

“We are thrilled every time we have a special day like this, where we can pair service dogs with those in need,” explains Lauren Driscoll, the person who trained the dogs and program director of the Paws of War Florida chapter. “These two men have given so much to our country, and we are happy to help give something back to them that may help make their lives more enjoyable.”

One of the dogs that will be given to the two men was a rescued dog from Port Saint Lucie Humane Society. Following adoption by the organization, dog underwent extensive training in order to become a service pet. Many veterans are helped by service dogs, including those who suffer from such issues as post-traumatic stress disorder (PTSD), traumatic brain injury, anxiety, and more.

The two men who will be receiving the service dogs are George Gonzalez and Stephen Watkins. George, who lives in S. Louis, Missouri, spent 10 years in the United State Air Force as an Aircraft Armament Systems Craftsman working on F-16s, F-15s and the Predator UAV. During that time, he spent two tours in support of Operation Enduring Freedom and Operation Iraqi Freedom. He will be paired with Sully, a beagle hound mix around three years old. George suffers from night terrors, and needs to go through the house when he wakes up with them. Sully has been trained to turn on all of the lights in the house, before George gets to each room, helping to ease his night terror anxiety.

“I am looking forward to the comfort and assistance that a service pet will bring me when I’m experiencing the night terrors,” says George Gonzalez. “I am happy that they have a program like this to help with such things.”

Stephen, who lives in Flagler County, is the caretaker of Mya, a four-year-old pit bull Lab. He has always been the caretaker of the dog, but the organization evaluated her for training, and has provided several months of training for Mia to become a service pet. The trainer goes to their home, and Stephen attends training classes. A Flagler County Sheriff’s Office detention deputy, Stephen was diagnosed with a staph infection on his spine, which left him paralyzed from the breast down. He comes from a family with a history of law enforcement, with his father serving as a police officer in New York for 25 years. His service dog has been trained to be able to open the refrigerator, turn on lights, and pick up anything that is on the floor that Stephen may not be able to reach.

“The benefits from having a service dog is always having a companion by my
side,” says Stephen Watkins. “Having a little help in picking things up off the ground and someone always there just in case I fall out of my wheelchair, are things that will be helpful and bring some peace of mind.”

“Anytime we can help our veterans as well as an animal in need, we fulfill our mission,” says Dori Scofield, of Paws of War. “Through our charitable organization we get to help our veterans, police officers, and give these pets a whole new leash on life.”

Driscoll has successfully trained 21 dogs prior to the two being paired up with the veterans this month. She is the owner of Pet Peeves Dog Training Florida, and volunteers her time for the Paws of War organization. The Florida chapter of Paws of War was launched in May 2015 and is located in Palm Coast. Paws of War is an all volunteer organization that provides assistance to military members and their pets, and provides service and service dogs to veterans suffering from PTSD. To learn more about Paws of War or make a donation to support their efforts, visit their site at: http://pawsofwar.org.