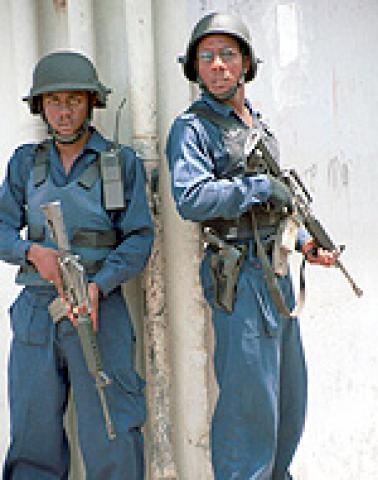 Getting rid of corrupt cops in the Jamaica Police Force seems like a non-ending struggle as a police sergeant, who was caught accepting money from a taxi driver, allegedly threatened a taxi driver, pulled his semi-automatic pistol and pointed it in the direction of his colleagues from the Anti-Corruption Unit who had gone to arrest him. "He put down the gun, ran into a building and made good his escape," said Assistant Commissioner of Police Justin Felice. He and members of Anti-Corruption Unit were chasing Sergeant Patrick Williams who ran along East Queen Street, downtown Kingston, before he made his escape. The scenario took place on Monday (April 14) outside the huge police complex on East Queen Street. It reported that Sergeant Williams and a team from the Police Traffic Department were conducting spot checks at Hagley Park Road. According the senior officer, who is given the heavy task of getting rid of corrupt cops in the force, said that he (Williams) stop a taxi driver to prosecute the driver for excess passenger, but however, instead he ask the driver for $20,000 with the promise not to prosecute. The driver of the taxi then contacted the Anti-Corruption Unit and a sting operation was set up in front of the Central Police Station. "He (Williams) was observed accepting a package from the taxi driver," said Felice Later when commenting on the Sergeant Williams misconduct he said "This goes to show the level of violence that these corrupt individuals are prepared to go to. The taxi drivers can help us because they are paying thousands of dollars daily to these corrupt policemen," Presently they are methods being implemented to crack down on members of the police force who misconduct, that is, being involved in corruption, said ACP Felice. The police sergeant is now being hunted by his colleagues.