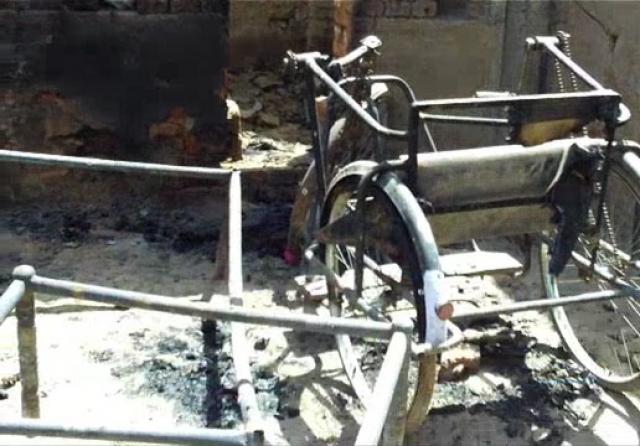 "Do the poor have no right to live?" exclaimed Jaswant, a local Indian of the village Mirjpur.  Over a month ago, Mirjpur had 20 houses burnt to the ground by the Jat Community and experienced zero support from local officers.

In fact, local officers were seen that night lounging in the houses of the Jats.  Some even stood aside as the houses were burned before their eyes.  There is great speculation that the police might have actually deployed several of the groups responsible for the carnage.

Having said that, the Jats have been increasingly more violent in the Hissar district of India.  As of late, they burned houses in Dulina, Salvan, and now Mirjpur village.  Of the three burnings only Mirjpur has experienced fatalities.

Two people died in the last carnage.  A man and his disabled daughter were burned alive in their home.  A survivor of the incident, the deceased man’s son, was interviewed by IndiaUnheard correspondent, Amit Kumar.

The man describes the means by which the Jats burned the houses, and his despair is felt through the screen as he shows the wreckage of his old home.

Jaswant explains that the Jats have been acting increasingly violent to try and prevent the Dalit and Valmiki communities (lower castes) from gaining equal rights.  "They want us to be their slaves.  This is the only reason for this carnage."

The Dalit and Valmiki communities aren’t experiencing relief from the government, who makes false promises of justice to silence their cries for help.

Standing tall to the camera, Jaswant speaks, "We want the government to punish the culprits, and book the officers under section 302-SC/ST."

Knowing your rights is a first step, but in a society that depends on the authority of a lackadaisical government, it is hard to imagine Jaswant or Mirjpur village will ever see proper justice for this incident.  In the meantime, the World’s attention must keep incidents of this nature at bay.

To learn more about this story and to explore the hidden truth’s behind India’s caste system, watch this short video.