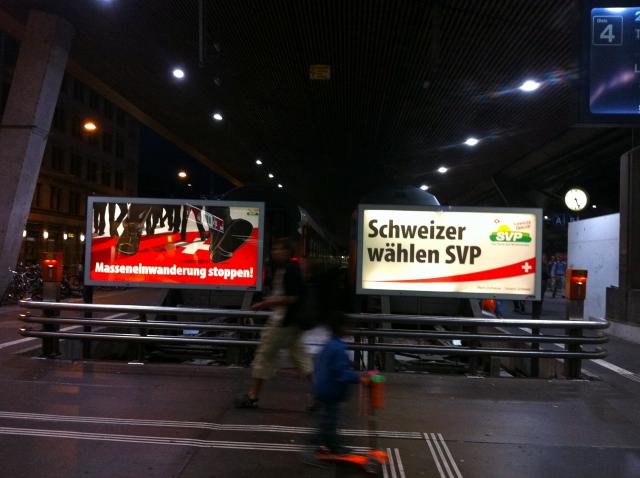 "Government of the people by the people shall not perish from the Earth" were the words of Abraham Lincoln. School children are made to ponder on this quote and many a school assignment has been garnished with a debate on this Gettysburg Address.

150 years since, democracies hold true to the essential truth that we the people get the government we deserve. And this applies to all free and pluralistic democracies, irrespective of their specific form. And as we groan under the burden of the theater that is played upon us from the stage of politics, let us look elsewhere to share the bewilderment with folks afar.

Case in point: Switzerland. Considered by many to be the epitome of democracy that enables every citizen to vote on, approve and/or negate any piece of legislation, irrespective of whether one is directly affected by the legislation in question. With the caveat that one requires a minimum number of fellow citizens who share the same thought.

The Swiss Peoples Party (SVP), a major player with over 25% of all votes in Switzerland, is renewing its efforts in really listening to the fears of your Average Joe. Its electoral campaign plays on patriotism and the fear of the unknown or better known as the uncivilized immigrant barbarian. Using a combination of graphics and pithy simplistic solutions that provide an aura of invincibility and perspicacity, it attempts to play on the fears of the populance with respect to immigrants, by calling for a referendum to rewrite immigration laws. One flaw in this issue is the fact that all are immigrants, even those who profess to be native. The nativity is probably a sign of naivety that bedevils many to espouse brilliant (and simplicistic) solutions to issues that we perceive to be important. Its all in the name of democracy, for no fault of its own.

Now if some of us do see similarities in their local governance, fear not it is but a widespread phenomena, just like the remarkable similarity in the personalities of dogs and their respective owners, and that no matter what breed or race! Now where has my pet dog gone to?