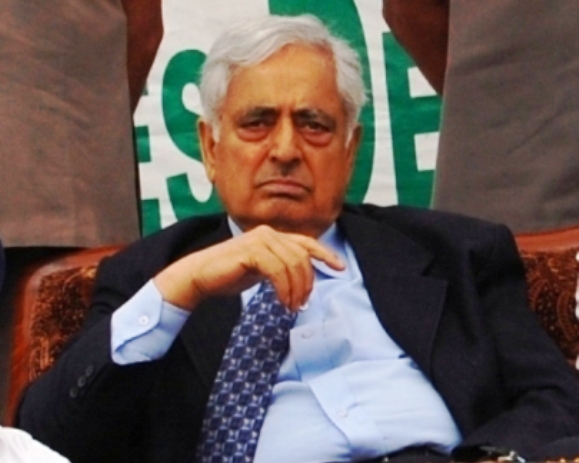 Kishtwar,November 16, (Scoop News)- Peoples Democratic Party (PDP) Patron, Mufti Mohammad Sayeed today said the upcoming assembly elections in Jammu and Kashmir are not only about formation of a new government, but deciding about a new direction for the State’s political and economic future.
“Defining moment has come in the political history of Jammu and Kashmir where people have to stand up to the massive challenge ahead to pull the State out of the political uncertainties and economic deprivation,” Mufti said while addressing an impressive election rally here to enlist support for the party candidates.
Mufti said the upcoming assembly election is about safeguarding the distinct constitutional position of J&K and standing up against the divisive forces, “It is about representing the people’s aspirations, upholding their dignity and ensuring a better future for the generations to come,” he said and added let’s therefore brace ourselves to face up to this momentous challenge. “To relax our efforts now would be a mistake which generations to come will not be able to forgive,” he said and added that people should judge various parties on the basis of their performance and agenda.
Seeking a strong and decisive mandate for PDP, Mufti said; “I’m optimistic about Jammu and Kashmir, its future and the opportunities the world out there holds for our coming generations, provided we take the right decision in the coming elections and elect a government that would come up to the expectations of the people.”
Reiterating his resolve to establish a new system of justice and equality in the State, Mufti said PDP’s aim is to script a new chapter in the political history of J&K by removing trust deficit and doing away with the physical barriers among different regions and sub-regions. “PDP has emerged as a cementing force to unite all religions, regions and sub-regions of the State,” he said and added that attaining power is not the ultimate goal of PDP, “we want to play a historic role to change destiny of the people of J&K by setting up a new system where every individual would get equal opportunity of growth and development.”
He said earning faith and trust of the people of J&K is the biggest achievement of PDP and it is because of the party’s unwavering stance on crucial issues that it has today emerged as a strong regional representative voice across the length and breadth of Jammu and Kashmir. “PDP had, during its brief stint in the Government between 2002 and 2005, scripted a new chapter of peace and development in Jammu and Kashmir and changed political discourse of the State through its visionary and pro-peace policies,” he said and added that his endeavor would be to accomplish the unfinished agenda of peace, progress and prosperity for Jammu and Kashmir.
Urging people of the Chenab Valley region not to waste their vote by casting he same in favor of any party other than PDP, Mufti said, the area would witness massive turnaround during the next 6 years if people give a decisive mandate to PDP. He said while ensuring better physical connectivity through all weather roads and tunnels, focus of his government would be to harness the immense potential of this gifted area for power generation and tourism promotion to generate massive employment avenues for the locals.
Speaking on the occasion, PDP chief spokesman Naeem Akhtar said PDP’s endeavor is to respond to and mitigate the complex problems of the state, faced as it is with decades long political uncertainty, development deficit, unfulfilled aspirations, mounting unemployment, corruption, nepotism and favoritism.
Dispelling the notion that J&K was a financially dependent state, Akhtar said there are no limits to the State’s economic potential and in addition to its rich water and mineral resources, the brand name Kashmir has many dimensions – be it tourism, art, handicrafts, forests or agricultural and horticultural products. He said PDP’s vision of a peaceful, stable and prosperous Jammu & Kashmir outlined in its Self-Rule document is essentially about neutralizing the historical political and economic excesses with the State that were compounded by its natural and political geography.