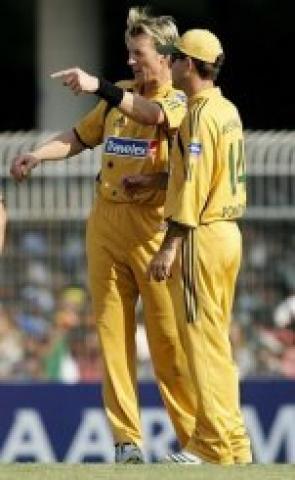 Australian skipper Ricky Ponting sought to clear the air on his spat with pacer Brett Lee during the Mohali Test, saying that the matter was blown out of proportion.

"I can assure everyone there is absolutely no problem between Brett Lee and me," Ponting wrote in his column in The Australian.

Detailing about the incident, Ponting said they were struggling to keep the over rate under control and at the same time were looking to curtail the Indian run flow which prompted a discussion with Lee.

"Brett was obviously disappointed he didn’t bowl in the first session and didn’t know the reason until I told him late in the session.

"What he couldn’t understand is that Mitchell Johnson and Peter Siddle had the chance to bowl before him. But by the time I wanted to bowl Brett, we were five overs behind on our over rate.

"If he were to come on and we went six or seven overs down then I could be suspended under the ICC playing conditions for slow over rates. Once we had a chance to talk it through he was fine with it."

"Lee said to me at the lunch break, "I’m a bowler, I want to bowl, and you’re a batsman, you want to bat", Ponting wrote.

"It is unusual that Michael Hussey bowls for us, although he did a reasonable job. That indicates I was trying to get through the overs without giving the batsmen the option of just running down the wicket and hitting the spinners back over their heads."

"I’ve read a few things that have intimated something might have happened before the day’s play and during the lunch break with Brett. That was rubbish."