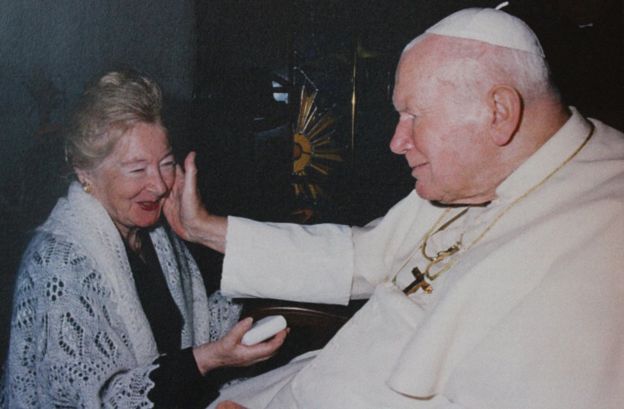 Some letters intense in feelings from Pope John Paul II have come to public by BBC that show Pope’s relationship with a woman. Pope had had a great relationship with this woman for nearly 3 decades and the letters have revealed that this relationship reached the peaks of emotions and feelings at times. The lady Pope was so intensely communicating with for 30 years was Anna-Teresa Tymieniecka. Anna is an American philosopher who has a Polish background. The letters had been resting in National Library of Poland until they were brought to public notice.

The pope had ended his life journey in 2005 and there was no information or talk of any such relationship during his reign of around 30 years. The content of the letter takes readers into the unexplored side of the pope where he had been emotionally attracted to a woman. Despite the great emotional communication that is within the letters, there is no proof that pope had chosen to break his promise with his Lord and those who trusted him. If something new is not revealed about the letters in the coming years, it can be said with surety that pope did not break his celibacy.

The start of the friendship took place in 1973 when Anna got in contact with the pope to talk about one of his books in which he had addressed philosophy. At that time he was the Archbishop of Krakow. Anna then took the liberty of traveling thousands of miles to Poland from the US to talk about the book with pope. Looking at the letter it is clear that the communication that took place between the two was quite formal in nature in the beginning. However, later communication contained more intimacy and emotions that marked the peak of the relationship.

“The Acting Person” was the book that was being discussed between the two and it was decided that they will jointly work with each other to add more to this book. The correspondence was done frequently and while there was a secretary present at the scene during most of their meetings, they met alone at times too. Just one year after the whole relationship started there is a letter in which the pope seems deeply emotional about letters from Anna. He says in one of the letters that he keeps on reading them out of emotions and for how personal those letters are for him.

They went to several places together including a camping trip. There are several pictures of the pair showing them together at various events and gatherings. In some pictures it is clear that she came to meet him in Vatican too. A Christianity history professor at Cambridge, Eamon Duffy, remarks by saying that pope was one of the most sacred figures in Christian history but he too can be seen in a relationship with an attractive woman in the pictures that have come to public’s attention. Pope even went to the US in 1976 for a conference where he received invitation from Anna to live with her in her family house.

The letters clearly show that Anna was deeply involved with the pope. It is clearly visible in the letters that pope was trying to scramble through his thoughts to know what his relationship with Anna really was and what it meant. There is a letter in which pope points at some words used by Anna in previous letters. He says in the letter that he read about Anna being torn apart but he does not know how to answer such statements and what they exactly meant.

In the letters, pope continues to call Anna a gift from God.

There was no news about Anna’s letters on BBC but they will be of more importance if they are brought to the public. As of now, BBC has only shown the letters that were written by the pope. However, it is being said that the letters from Anna were also at Polish National Library because she had sold them to the library. BBC has not talked about any letters from her but it is believed that they might also be present at the same places from where pope’s letters were retrieved.

Some words have come from Marsha Malinowski, who was involved in the selling of the letters and is also a dealer in manuscripts. She says that the letters clearly show how Anna had fallen in love with pope right in the beginning. Another hint of their love comes from the scapular that pope chose to give to Anna as a token of the strength of their relationship. A scapular is worn by the pope around his shoulders for the purpose of devotion to his mission of life for Christianity.

There is a letter from 1976 that shows that Anna had said to the pope that she belonged to him because he gives a reference of these words in his letter. He goes on to say that he is speechless while trying to answer these words from Anna but he thinks that his scapular will be a great way to show his passion in the relationship. The pope said that this was his way of showing his love to Anna and an acceptance of the fact that he will feel her wherever he goes and will not forget her no matter how far away he was from her.

A very important letter from pope was written to Anna after he officially became pope. He wrote the letter to Anna and said that he wanted to continue with the conversation even after becoming a pope. He said in that letter that Anna was a part of his life he was not going to forget even if he had become a pope and had to deal with more responsibilities. The relationship is being called just one of the many relationships that Cardinal Wojtyla, the later pope, had in his life. These were normal relationships and the correspondence with these women was not as intense as it was with Anna.

It can be seen clearly in his letters to Anna that he was stuck between his duties and the relationship he was having with Anna and at times he could not decide what he needed to do. Pope John Paul II had a reign of 27 years and he left this world with millions of lovers in 2005. Just 9 years after his death he was given the mark of saint despite the fact that this process takes much longer than 9 years. Whether the Vatican had read these letters before it declared him Pope is not known yet.