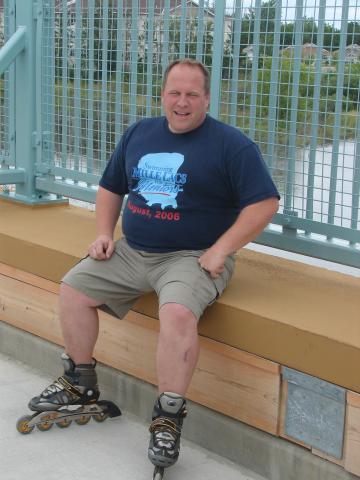 Portly youth-mentor activist Gary Walters from Baxter, Minnesota will Rollerblade@ 1400 miles through 24 cities in 21 days later this month. Walters will leave Baxter on Thursday, August 13th and arrive on the Capitol steps on Wednesday, September 9th. Walters hopes to raise money and awareness for Kinship Partners and other youth mentoring programs. Walters stands 5’9" and weighs in just this side of 300 pounds. He said he got the idea in church and thought "if a short, fat guy like me can do this, anybody can mentor a child." Walters’ previous stunts include biking from New Orleans to Minnesota, unicycling for 24 hours, and losing 100 pounds over the summer. Some of the weight has returned. Walters said people can support his fundraising effort by logging on to the Kinship Partners website www.kinshippartners.org.