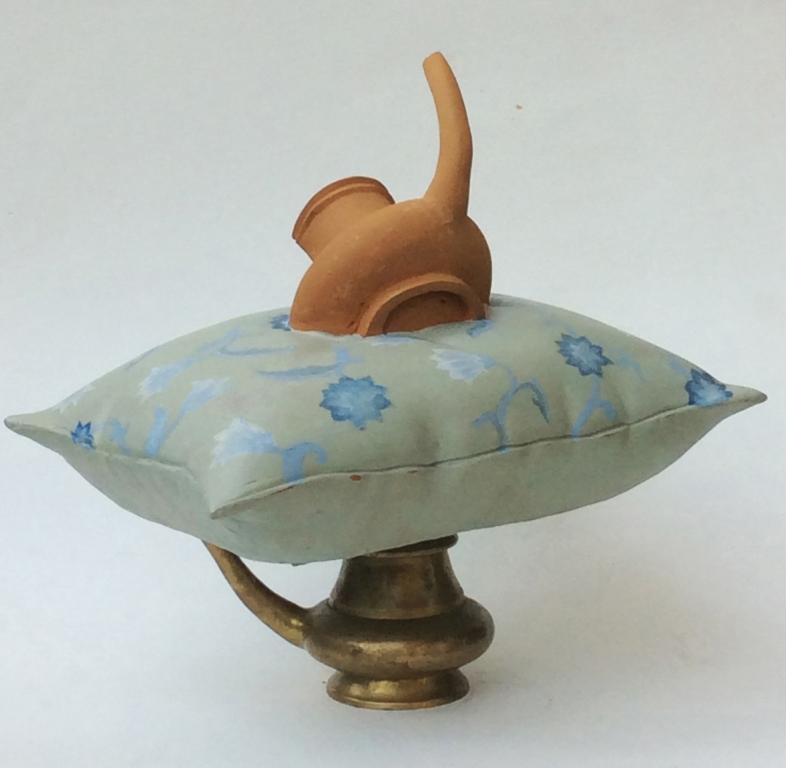 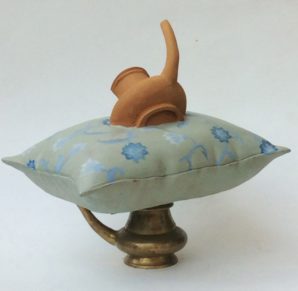 Postponed Poems is the aggregate of Kamath’s distinctive imagery rich with the narratives of everyday life, interwoven with mythologies and intimate stories. Kamath’s collecting hobby of over 30 years forms the basis for understanding of his new body of sculptural work. The old and aged classical and folk sculptures holding the trace and weight of time becomes the subject for his work. The artist is fascinated with the amazing forms of the past such as traditional temple sculptures, broken parts of old havelis, ritual masks and icons of god and goddesses. The artist pours out his heart and soul and captures such antiques in terracotta sculptures. His works signify beyond the mere meaning of realistic representation, to becoming a kind of shamanistic process that honors aged things and elaborately traces the various lives and sensibilities inherent in the objects.

At the same time, Kamath imparts his signature flavor of witticism in his interpretation of the secular, mythological and the historical. Hence, his terracotta sculptures in this show are inspired by classical aesthetics but turned into a modern metaphor replete with humor and satire.

Says the 42-year-old artist: “I have a great fascination for traditional classical sculpture and paintings from my childhood, and I still remember that I spent hours looking at those sculptures in temple chariots and on walls. The temples and churches are like art museums for me, and that was how I was introduced to art. I have spent hours with local craftsmen watching them make idols of Gods and Goddesses. Eventually, I even started collecting classical sculptures and paintings like ritual masks, wooden and metal sculptures, parts of temple chariots, old terracotta sculptures. It was natural then that I would want to bring the aesthetics of this classical style into my works but interpret them on my own terms. It is like reconnecting to our roots.”

Kamath tells many stories with his images but his narratives are altered and adjusted constantly, adapting fluidly according to the environment they are narrated in, and resulting in a different meaning each time a story is told. As a visual artist, Kamath feels impelled to regularly reinvent his method of storytelling. By relentlessly working on his articulation and modernizing his techniques, the artist continuously updates his visual vocabulary.

Filed under: Art, Lifestyle
Share Tweet Pin G Plus Email
previous article: France to begin the year with more attacks?
next article: “Iran and its nuclear weapons program, I believe, pose the number one threat to our national security”, says Rep. Dold