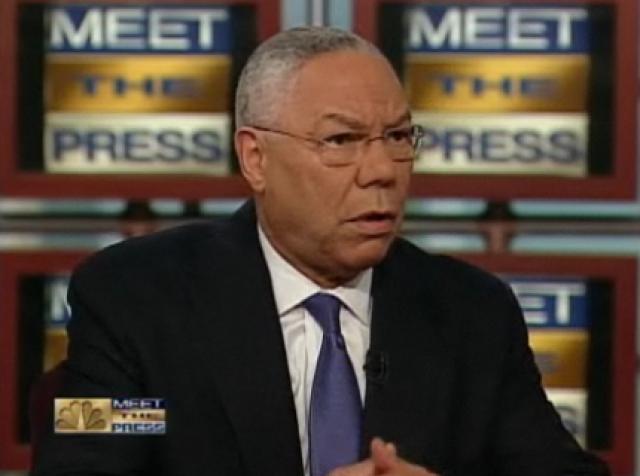 Today Former Secretary of State Colin Powell endorsed Barack Obama for president. Speaking on television program ‘Meet the Press’, Powell said he was ‘troubled’ by the rightward movement of the Republican Party, and that John McCain had gone ‘too far’.

The full transcript of Powell’s speech:

I know both of these individuals very well. I’ve known John for 25 years, as your set-up said, and I’ve gotten to know Mr. Obama quite well over the past 2 years. Both of them are distinguished Americans who are patriotic, who are dedicated to the welfare of our country.  Either one of them, I think, would be a good president.

I have said to Mr. McCain that I admore all he has done. I have some concerns about the direction that the party has taken in recent years it has moved more to the right than I would like to see it, but that’s a choice the party makes.

And I’ve said to Mr. Obama, you have to pass a test of ‘do you have enough experience?’ And do you bring the judgment to the table that would give us confidence that you would be a good president.

And I’ve watched them over the past two years frankly, and I’ve had this conversation with them.

I have especially watched over the last 6 or 7 weeks as both of them have really taken a final exam with respect to this economic crisis that we’re in and coming out of the conventions.

And I must say that I’ve gotten a good measure of both, and in the case of Mr. McCain, I found that he was a little unsure as to how to deal with the economic problems that we were having. And almost every day there was a different approach to the problem.

And that concerned me, sensing that he did not have a complete grasp of the economic problems that we had. And I was also concerned at the selection of Governor Palin. She’s a very distinguished woman, and she’s to be admired, but at the same time, now that we have had a chance to watch her for some seven weeks, I don’t believe she’s ready to be President of the United States, which is the job of the Vice President.

And so that raised some question in my mind as to the judgment that Senator McCain made.

On the Obama side, I watched Mr. Obama, and I watched him during this 7-week period.  And he displayed a steadiness, an intellectual curiosity, a depth of knowledge, and an approach to looking at problems like this and picking a Vice President that I think is ready to be president on day one, and also in, not just jumping in and changing every day, but show intellectual vigor. I think that he has a definitive way of doing business that would serve us well.

I also believe that on the Republican side, over the last 7 weeks the approach of the Republican Party and Mr. McCain has become narrower and narrower.  Mr. Obama at the same time has given us some more broader inclusive reach into the needs and aspirations of our people.  He’s crossing lines– ethnic lines, racial lines, generational lines.  He’s thinking about all villages have values, all towns have values, not just small towns have values. And I’ve also been disappointed frankly by some of the approaches that Senator McCain has taken recently, or his campaign has, on issues that are not really central to the problems that the American people are worried about. This Bill Ayers situation that’s been going on for weeks became something of a central point of the campaign, but Mr. McCain says he’s a washed out terrorist—well, why do we keep talking about him?  And why do we have these robocalls going on around the country trying to suggest that because of this very, very limited relationship, that Senator Obama has had with Mr. Ayers, now Mr. Obama is tainted. What they’re trying to connect him to is some kind of terrorist feelings, and I think that’s inappropriate.

Now I understand what politics is all about, I know how you can go after one another. And that’s good. But I think this goes too far. And I think it has made the McCain campaign look a little narrower. It’s not what the American people are looking for.

And I look at these kinds of approaches to the campaign and they trouble me.

And the party has moved even further to the right, and Governor Palin has indicated a further rightward shift. I would have difficulty with two more conservative appointments to the Supreme Court, but that’s what we would be looking at in a McCain administration.

I’m also troubled by…what members of the party say, and is permitted to be said, such things as, ‘Well you know that Mr. Obama is a Muslim.’ Well, the correct answer is, ‘He is not a Muslim, he’s a Christian, he’s always been a Christian.’

But the really right answer is, ‘What if he is? Is there something wrong with being a Muslim in this country?’

The answer’s ‘No, that’s not America.’

Is there something wrong with some 7-year-old Muslim American kid believing that he or she could be president? Yet I have heard senior members of my own party drop the suggestion he’s a Muslim and he might be associated with terrorists.  This is not the way we should be doing it in America.

I feel strongly about this particular point because of a picture I saw in a magazine. It was a photo essay about troops who were serving in Iraq and Afghanistan. And one picture, at the tail end of this photo essay, was of a mother in Arlington Cemetery, and she had her head on the headstone of her son’s grave, and as the picture focused in, you could see the writing on the headstone. And it gave his awards, purple heart, bronze star, showed that he died in Iraq, gave his date of birth, date of death, he was 20 years old, and then at the very top of the headstone, it didn’t have a Christian cross, it didn’t have a Star of David, it had a crescent and a star of the Islamic faith. And his name was Kareem Ushad Sultan Khan. And he was an American. He was born in New Jersey. He was 14 years old at the time of 9/11. And he waited until he could go serve his country, and he gave his life.

Now we have got to stop polarizing ourselves in this way. And John McCain is as nondiscriminatory as anyone I know, but I’m troubled about the fact that within the party, we have these kinds of expressions.

So when I look at all of this and I think back to my army career, we’ve got two individuals.  Either on of them could be a good president. But which is the president that we need now? Which is the individual that serves the needs of the nation for the next period of time? And I’ve come to the conclusion that because of his ability to inspire, because of the inclusive nature of his campaign, because he is reaching out all across America, because of who he is and his rhetorical abilities, as well as his substance, he has both style and substance, he has met the standard of being a successful president being an exceptional president, I think he is a transformational figure, he is a new generation, coming onto the world stage, the American stage,

And for that reason, I will be voting for Barack Obama.