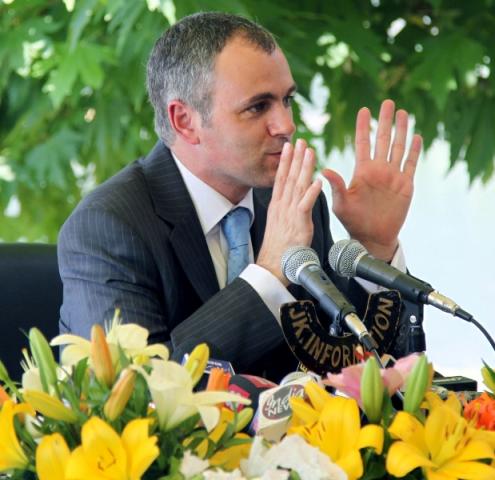 Jammu, November 06(Scoop News) –   Chief Minister, Omar Abdullah Tuesday said that self-reliance in power generation looms large on economic spectrum and a multi-pronged strategy has been put in place by his government to make necessary dent in power generation and its distribution.

Omar Abdullah said that the growth and development of economy in a State like is greatly dependent on availability of power adding that the State has a rich potential for generation of hydro energy and this aspect has been flagged as one of the most important concerns in the development agenda.

Taking brief on the status of various power projects being implemented by Chenab Valley Power Projects (P) Ltd (CVPP) at a high level meeting here, the Chief Minister said that this joint venture company has a stupendous role to play in catapulting indigenous power generation in the State.

Chairman CVPP, Mohammad Yusuf Khan in a PowerPoint presentation made in the meeting, gave presented resume of the power projects being executed by the Company. He gave details of the status of progress on these projects and assured the meeting that the Company would stick to the targets fixed for completion of these prestigious projects entrusted to it for execution.

The meeting was informed that the Company will be initially involved in development of 2220 MWs of hydro electricity from three projects of Pakuldul, Kiru and Kawar while it also plans to develop second phase of 450 MW Dulhasti HEP.

The Pakuldul HEP involving an estimated expenditure of Rs. 8847.81 crores is likely to generate 1000 MWs of power. The completion schedule of the project is six years from the date of award of works. Pakuldul project is located in Kishtwar district and it will utilize Marusudar tributary of river chinab at village Drangdhuran about 45 kilometers from Kishtwar. The dam will be 167 meter high concrete face rock fill dam with two numbers of HRT of 7.2 meter dia horse-shoe shaped each 10 kilometers long. The power station will be under ground at village Dul about 26 kilometers from Kishtwar. It will have four units of 250 MWs capacity each. The annual power generation from this project will be 3228.41 million units.

The 660 MWs Kiru HEP will be a run of river scheme located about 42 kilometers from Kishtwar. It envisages construction of 135 meter high dam and an underground power house. It is estimated to cost Rs. 4068 crores and annual generation from this project will be 2301.81 million units.

The Rs. 4375.50 crore Kawar HEP with generation capacity of 560 MWs is also located 38 kilometers from Kishtwar. The dam of the project will be 100 meter high concrete gravity dam. The power house will be underground with four units of 140 MW capacity each. The project is schedule to be completed in 54 months from the date of award of works.

The Chairman CVPP told the meeting that the Company is utilizing common infrastructure facility for all these projects to reduce the costs. He said that construction of Pakuldul HE Project will also help to increase generation capacity of Dulhasti HEP Phase-II from 450 to 600 MWs without any enhancement of expenditure or change in design.

The meeting also discussed matters pertaining to the construction of Banderkote-Nowpachi road serving twin purposes of opening up of the remote and inaccessible areas and facilitating construction of power projects.