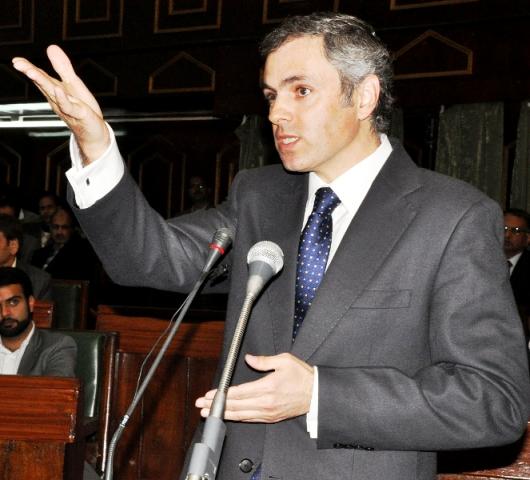 , February 25 (Scoop News) –  Castigating PDP for nurturing falsehood and unleashing unfounded propaganda to astray people for vested interests, Chief Minister, Omar Abdullah Saturday said that this party has made Gobble’s theory of telling hundred lies in one voice its mindset to deceive people so that they believe in fake tales.

Winding up the discussion on the issue of corruption in Legislative Assembly here this afternoon, Omar Abdullah said that PDP circulated false rumours and published concocted stories regarding the rotational Chief Minister for quite some time to create wedge between NC and Congress for vested interest of power game.

“The party indulged in this machination to create the situation conducive for grabbing power which is its ultimate goal in politics”, he said adding that after eating a humble pie on this count PDP tried yet another plot to create misunderstanding between the coalition partners by speaking in a particular tone in the House today. He said the only aim of PDP to disrupt the Assembly proceedings for two consecutive days and demanding discussion on corruption was only to poison the relations between Congress and NC and try to fish in troubled waters.

“This is evident by the speech made by its leader in the House for over 75 minutes. Had the party been sincere on the issue of corruption it would have pinpointed measures and identified areas to be addressed to check corruption? Instead PDP leadership tried its best to create bad taste between National Conference and Congress”, he said maintaining that the senior leader of the party indulged in mud slugging and using bitter words quoted with sweetener.

Omar Abdullah said that falsehood and propagandist approach has become trait of PDP and Gobble’s theory its mindset. “PDP talked less about corruption in the House but pointedly tried to attack political understanding between NC and Congress”, he said rejecting this politics of the party advising PDP not to rear snake as it would sometime bite them bitterly.

The Chief Minister said that he had asked Vigilance Organization to look into the press reports regarding the two Ministers,  Rather and  Sagar and the investigation conducted by the Vigilance Organization found all allegations against them unfounded and baseless. He said similar investigation was asked to be conducted against another Minister which also revealed that the allegation against him was false. “As such, the matter was dropped for being baseless”, he added.

On the resignation of Peerzada Mohammad Sayed, the Chief Minister said that he had never asked the Minister to submit his resignation. “Had he given any such direction to the Minister, he would have submitted his papers within minutes”, Omar Abdullah maintained and said that during the tenure of Mufti Mohammad Sayed a group of Congress Ministers submitted resignation directly to the then PCC Chief bypassing the Chief Minister. “PDP does not remember this as it was the event of their own history”, he added and asked Muzaffar Hussain Baig why he didn’t speak with same emotions at that point in time on the issue.

Omar Abdullah said that the Congress has a culture of asking resignation from any of its Ministers against whom CBI enquiry is initiated. “Had he been aware of this principal of the Congress party, he would have initiated Crime Branch enquiry against erstwhile Minister, G. M. Saroori”, Omar said adding that soon  Saroori is cleared by the investigating agency  Saroori will get back his portfolio. He said that initiating of investigation by CBI or Crime Branch is only aimed at unearthing the truth so that nobody points finger towards any Minister.

Omar Abdullah said that his Government took historic initiative to curb institutional corruption and bring transparency in government functioning. He said enactment of Public Service Guarantee Act and bringing 50 services of 6 departments under its ambit is most effective and befitting measure taken by the coalition government to eradicate smaller corruptions at the lower levels.

“My Government has constituted State Information Commission (SIC) and given teeth to State Accountability Commission (SAC). I am happy with the functioning of the both”, he said elaborating that these institutions would prove fruitful to bring in transparency and curb institutional corruption.

Taking a dig on the then PDP Government for its feeble and exhibitory action against corrupt officials pretending to be serious about the issue of corruption, the Chief Minister said that the then dispensation made so week cases against the officials that they are one by one getting exonerated and returning back to the service.

“You are only raising slogans and creating hypes and my Government is taking concrete measures both are evident by our actions”, he asserted and referred to the practice of rendering apologies by PDP in the House, in private and through telephones after making false allegations against the members of the government.