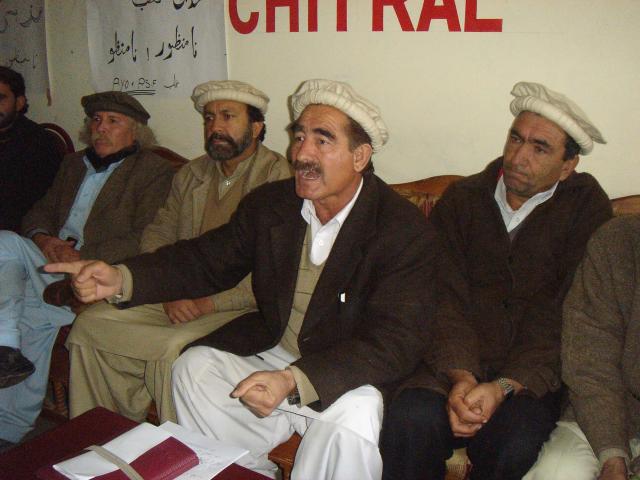 By: Gul Hamaad Farooqi
CHITRAL:  Workers of Pakistan People’s Party (PPP) denied former MNA allegations. Addressing to a huge press conference Muhammad Hakim Advocate General Secretary of PPP Chitral, Bashir Ahmad political Secretary to provincial Minister for population Welfare, Burhan Shah Advocate, Iqbal Hayat president of PYO and other said that during a TV talk show former MNA Chitral Abdul Akbar used very non official language and misbehaved with provincial Minister Saleem Khan. Which give a bad impression of Chitral culture. They said that Lawari tunnel was started with former Premiers Shaheed Zulfiqar Ali Bhutto and worked stopped in General Zia regime. Hence its excavation work was completed in Parvez Musharaf government but it design was changed from rail tunnel to road tunnel with enhancing its cost from 8 to 18 billion. It is fact that work suspended on Lawari tunnel for 4 years but its design was changed and its assumed once again and will be completed until 2015. They said  that Abdul Akbar claimed that he had appointed 8000 youth which is totally wrong if he can prove only 800 our minister will resigned from his seat. They claimed that Saleem Khan have appointed 1500 people from different parts of Chitral  without any personal benefit they termed down Abdul Akbar allegation for getting bribe in appointment by Saleem Khan. They said that Abdul Akbar delivered wrong statement regarding By pass road that some 20 million rupees have been released for By pass road and work had started in MMA Government  which is totally  wrong and baseless. There was nothing in MMA government for by pass road and present provincial government have allocated 720 million for By pass road and work also had been started on this mega project. They said that cutting of forest was started in MMA government but former MNA Abdul Akbar was silent at that time because of getting personal benefits. They said that first phase of Lawari tunnel was completed by Parvez Musharaf and Abdul Akbar trying for getting its credit which is a cheap publicity. They said that PPP leaders have already requested to Federal Interior and Communication Ministers for opening of Lawari tunnel 4 hours daily for traffic. Responding to a question that Lawari tunnel was started in Zulfiqar Ali Bhutto regime but work stopped by General Zia why it was not resumed in Benazir Bhutto twice regime. They said that her government was ended in 18 and 23 months only. A large number of Peoples Students Federation, Peoples Youth Organization and PPP workers were present on the occasion.
G.H. Farooqi C/O Manager bank Islami Main branch Chitral phone No 0943-320737, 0943-316052, 0943-414418  , 03025989602, 03337069572, 03159698446, 03469002167
email: gulhamad@gmail.com
Filed under: Media & Tech, World
Share Tweet Pin G Plus Email
previous article: Bodies of Six militants recovered in Sopore in North Kashmir
next article: Wife of former Mehtar (Ruler) passes away