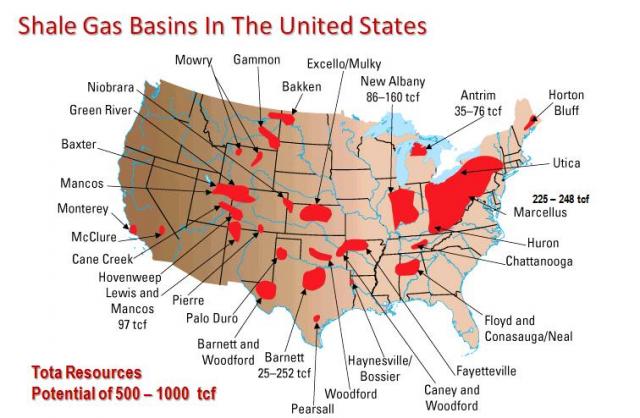 The oil industry has known about the Marcellus shale formation in New York State for close to 100 years but has never had the technology to extract the gas it contains until recently.  The gas is located 5,000 to 10,000 feet below the surface and the amount of available gas depends on the thickness of the shale layer.  In NY State, the layer is shallower than what occurs in Pennsylvania. Generally, the formation runs in a southwesterly direction from the lower Catskills all the way to West Virginia and Tennessee.

In order to extract the gas efficiently, hydro-fracturing is required (also called fracking).  Horizontal extraction can be accomplished up to one mile away from the well head.  The problem is that fracking requires huge quantities of water, pumped down the bore hole under great pressure, which must be obtained either from surface sources or from the nearest underground aquifer.  In the process of vertical drilling, the bore hole passes through the aquifer which is usually less than a 1,000 feet below the surface.  Unless the bore hole is properly sealed, toxic chemicals such as benzene (in the fracking water) can easily leak into the aquifer thus contaminating wells.  In addition, the amount of water used is enormous.  Taking water from the aquifer can easily lead to water wells drying up.  As I understand it, the environmentalists want better regulations to prevent either of the these two scenarios from occurring.

Why do I know this? I signed a gas lease this past summer on our 120 acre property in PA.  Our lease is a "non-access" lease the prohibits the gas company from entering upon or drilling on our property.  We signed the lease because we knew that all of our neighbors either signed or would sign gas leases and therefore we would have no way of knowing whether extraction was taking place under our property regardless of whether or not we signed a lease. The extraction will be done horizontally from a well head located on a neighbors property.  However, Just 2 miles from our house, a well was severely contaminated from gas drilling rendering the homeowners water source unusable.

The real problem is that the economies of upstate New York and rural Pennsylvania are akin to Appalachia.  These gas companies are now paying thousands of dollars per acre just for leasing rights which does not include income from royalties which could be even greater.  If one owns a 100 acres, the upfront payment for rights could exceed $500,000.00.

This kind of money will not be turned down by land owners who have for years been scrabbling to eke out a living by dairy farming. I don’t think it’s realistic to expect that they will be willing to have a ban placed on gas extraction from their properties.

Nevertheless, it is not unrealistic to require strict regulation of the drilling process and to prohibit the taking of water from local aquifers.  This might slow down but it would not stop drilling.  If you know anyone with land in the Marcellus shale area I would recommend that they can do the following:

1. See if they can obtain a "non-access" lease that prohibits drilling on their property but permits horizontal extraction from underneath their property.

2. Alternatively, they can demand as part of their lease that the gas company is prohibited from obtaining water from their aquifer.

3. Before any drilling takes place they must have their well water comprehensively tested for chemicals and bacteria.  There are companies that specialize in this testing at the cost of approximately $400.00.  Most states require a gas company to remediate, at its own expense, any problems with a water well that may arise from drilling.  However, without baseline data on ones water composition the landowner will be behind the eight ball if the matter goes to court,

4. Make sure that the drilling does not take place any closer than 500 feet to the source of drinking water.