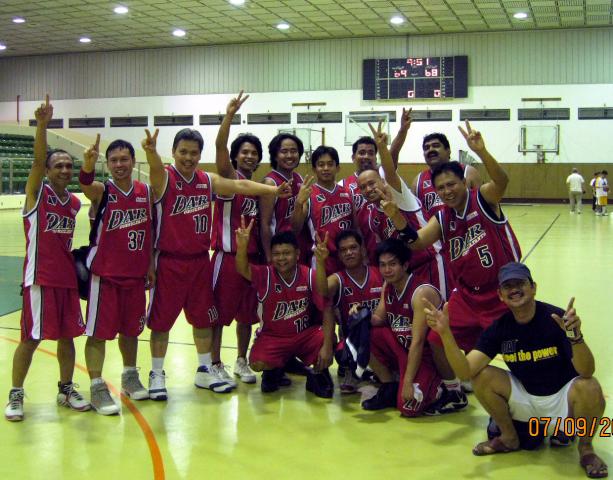 Dammam, Saudi Arabia – Prakash Mathew had the ball last, and made a high leaping layup on the 15-foot lane, lifting the DAR Al Riyadh Consultants to a 68-67 buzzer beating victory over favourite Intercontinental Hotel Al Khobar squad on the curtain raiser in the Inter-company C division of the Eastern Province Basketball League 2010 Friendship Cup at the Ettifaq Club Gymnasium here Friday.

The Consultants’ hard-earned win snapped a two-conference losing streak, and that was a big difference sending the team in a celebration after the game.

The Indian sensation Prakash had eight points and four rebounds and took the winning shot after Intercon Hotel made it 67-66 on a free-throw shot by Dayoc with 9.6 seconds remaining in the last canto. With no more time-out left for both squads, the Consultants Rez Gargantiel dribbled the ball and seemed to take the last shot but swung it to a wide-open Prakash to give DAR Al Riyadh victory.

The Consultants opened a big 14-point lead 22-8, courtesy of Gargantiel with eight of his 13 points; veteran Jun Bernal had five points while Joseph Macatangay and Prakash added two points each but blew all of it in the third quarter after Intercon tied it at 47-all entering the fourth period.

The two teams’ traded big shots in the last canto, the Consultants Sean Capili had eight points; Ram Caballero had four while Bobbie Gacusan had a jumper before fouling out. Rick Hidalgo almost single-handedly carried Intercon with eight of his game high 24 points seemed to have the ball in hand but Prakash would take it for the winning shot.

In the other game, James Kalaw was back to his old reliable form and led Al Iman Gasket Factory team to their first win past arch-rival defending champion Al Bilad Fire Fighting Company squad via overtime 89-80, in the Intercompany League B division.

After the game tied at 76-all in the regulation, Kalaw was unstoppable underneath and scored six of his 26 points to give Al Iman an 8-2 run for a commanding 84-78 lead and never looked back.