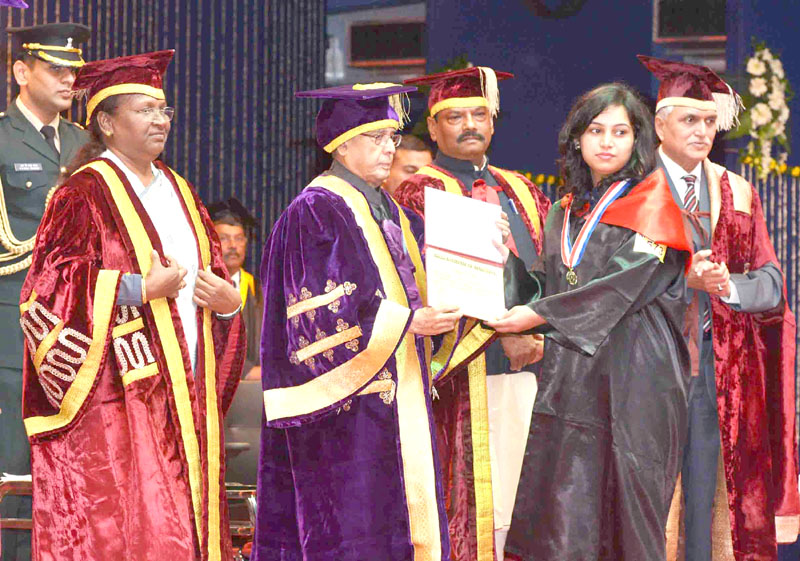 The President, Mr. Pranab Mukherjee presenting the degree to a student at the Diamond Jubilee Celebration and the Convocation of the Birla Institute of Technology, at Ranchi, Jharkhand on January 10, 2016. The Governor of Jharkhand, Mrs. Draupadi Murmu and the Chief Minister of Jharkhand, Mr. Raghubar Das are also seen.

Ranchi, Jharkhand (PIB-GR-TYP-BIN): The President of India, Mr. Pranab Mukherjee inaugurated the Diamond Jubilee Celebrations of Birla Institute of Technology and addressed its convocation ceremony at Ranchi, Jharkhand on January 10.

Speaking on the occasion, the President said India cannot lose sight of fact that over 250 million people in the country languish at subsistence level of poverty. The task of taking them out of poverty may be daunting but possible. Our socio-economic progress has to be tempered with a commitment to equitable distribution of its fruits to all sections of our society, particularly the backward, less-privileged and the disadvantaged.

BIT Mesra has created many pioneers for social uplift in cities and villages. Its alumni by designing affordable water purification plants for hand pumps and other village water bodies, and by re-designing hospital bed servicing, has provided the critical fruits of technology to the poorest of the poor. He urged upon all of them to continue the thrust on socially responsive projects through the medium of research and technology. Let research in academic institutions become relevant for those at the bottom of the socio-economic pyramid!

The President said to realize the productive potential of our economy, it is necessary to provide a head start to various innovation activities. For, it is innovation, over and above capital and labour, that is the deciding factor for enhanced production in an economy. The youngsters of today are brimming with innovative ideas. They require a platform to give wings to their novel thoughts. The concept of innovators’ clubs started in several central institutes of higher learning can be replicated in other institutions. These clubs can tie up with innovation incubators existing in technical institutions to mentor and develop innovations into viable products. It is necessary to strengthen the chain between innovators, technical institutions and financiers.

The President said due to the facilitative environment that has evolved, the youth today has a greater flair for entrepreneurship. Many start-ups in India have become successful and shown the path of progress to others. The higher academic institutions have a clear role to play in refining the entrepreneurial abilities of their students. Entrepreneurial studies can be taught as a course in our institutions. Other support measures like the small industries entrepreneurs’ park of BIT Mesra are needed to prepare students to become job-creators rather than job-seekers.