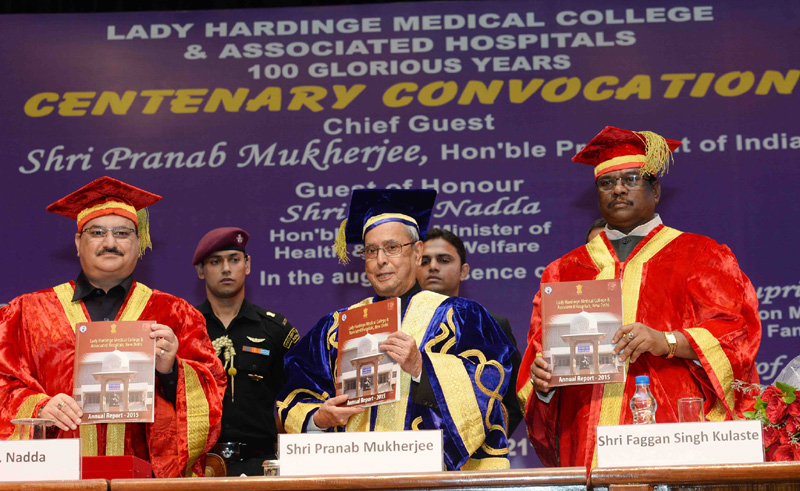 Addressing the gathering, the President congratulated the Lady Hardinge Medical College on the occasion of its centenary year celebrations and convocation. He also congratulated all the awardees and said that convocation is an important milestone in the life of students, their parents and faculty members. He appreciated the efforts of Lady Hardinge who had thought of establishing an exclusive college for women in order to provide them modern and scientific medical education.

The President said that doctors should consistently be sensitive and empathetic towards the patients who they cure. A doctor, who is visibly concerned towards his patient, cures half the ailment in his first interaction with him or her. It is this attitude that should always guide them, before the drugs and medicines prescribed by them begin to give their required effect. While clinical detachment is certainly required, this detachment should not lead to taking monetary advantage of a patient and his family who have entrusted their lives in their hands with full faith.

The President said that all doctors have followed an extra-ordinarily arduous academic journey to reach where they are today. However, theirs is a discipline and profession that would require them to be a student, a scholar and an innovator all their life. While the fact that every human being is uniquely made will give them an opportunity to learn with every new patient they see, it should also lead to prescribing customized care and treatment.

New developments in medical research will demand of them to be students and learners on a daily basis. In this regard, as physicians they should always keep their minds open to emerging ideas and circumstances around them. While other disciplines may lead to basic education getting separated into professional application and academic research after the qualifying degree, medical education is one discipline where profession and research will have to go hand in hand always.

The President said in a nation like India where public health needs are ever increasing, it will be only one further step in the noble profession that they have chosen, to regularly focus on public health and medical facilities away from the cities, in the smaller towns and villages of India. While the Government does its bit in enhancing health services, a resolve on their part is going to do wonders to the public health infrastructure.

The President said that while against the international norm of one doctor per thousand population, we have only one doctor for 1700 people in our country. The situation is all the more alarming in rural India where the shortage of surgeons is to the tune of 83.4%, obstetricians and gynaecologists 76.3 percent, paediatricians 82.1 percent and general physicians 83 percent at the level of the Community Health Centres (CHCs). The overall shortage translates to 81.2% as of the year 2015. He said that from the above data one could appreciate the huge dimension of building up health infrastructure in our country particularly in rural areas.

The President concluded by sharing a famous quote and said, “HE WHO HAS HEALTH HAS HOPE, AND HE WHO HAS HOPE HAS EVERYTHING”.