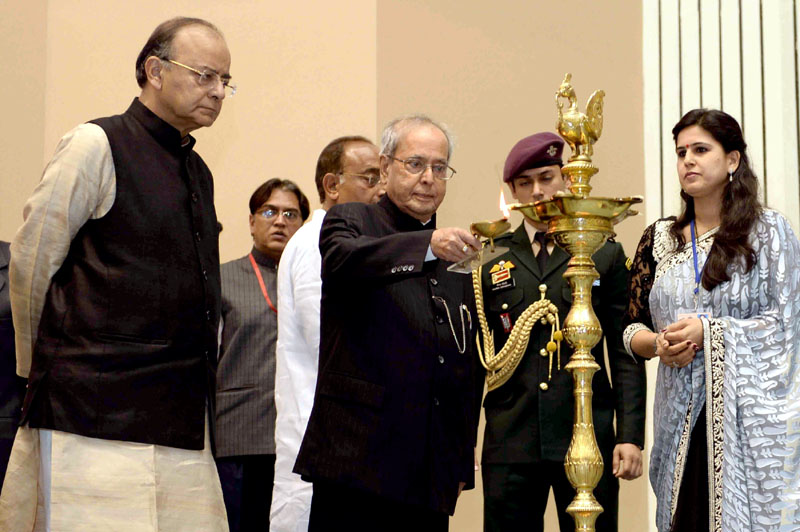 The President, Mr. Pranab Mukherjee lighting the lamp at the inauguration of the 90th Anniversary of Shri Ram College of Commerce, in New Delhi on February 20, 2017. The Union Minister for Finance and Corporate Affairs, Mr. Arun Jaitley is also seen.

New Delhi (PIB-GR-TYP-BIN): The President of India, Mr. Pranab Mukherjee addressed the inaugural Ceremony of the 90th Anniversary of Shri Ram College of Commerce in New Delhi on February 20.

Speaking on the occasion, the President said global rankings of Indian higher educational institutions remain poor. After several years of efforts, he is satisfied that at least three institutions of higher learning in the country have secured top places. Shri Ram College of Commerce, New Delhi has been doing well. It should now set itself higher benchmarks of excellence.

Pointing out the importance of research and innovation, the President said Germany was only the country unaffected by 2008 financial crisis and Euro zone crisis. This was because of the solid foundation for research and development within the country as well as the world class institutions it has established.

The President said for decades Shri Ram College of Commerce has met the essential requirements of connecting education to the needs of an emerging nation, as also developed livelihood and professional skills in the field of business and economics. It is heartening to note that the vision of its founder, Sir Shri Ram to create an institution that would train young minds to manage the needs of industry, business and economic administration has been fulfilled comprehensively. Today we talk of industry-academia interface. It goes to the credit of the founders of Shri Ram College of Commerce that almost a century back they insisted on real life industry exposure to teachers as well as students.

The President said a class room is meant to complement the realities and complexities of the real world. Application of theoretical learning to real life situations and finding workable solutions to such situations is the real test of success in academic postulates. He was happy that having stood the test of time, the Shri Ram College of Commerce has not only maintained excellence in academics but also produced students who have gone on to excel professionally.