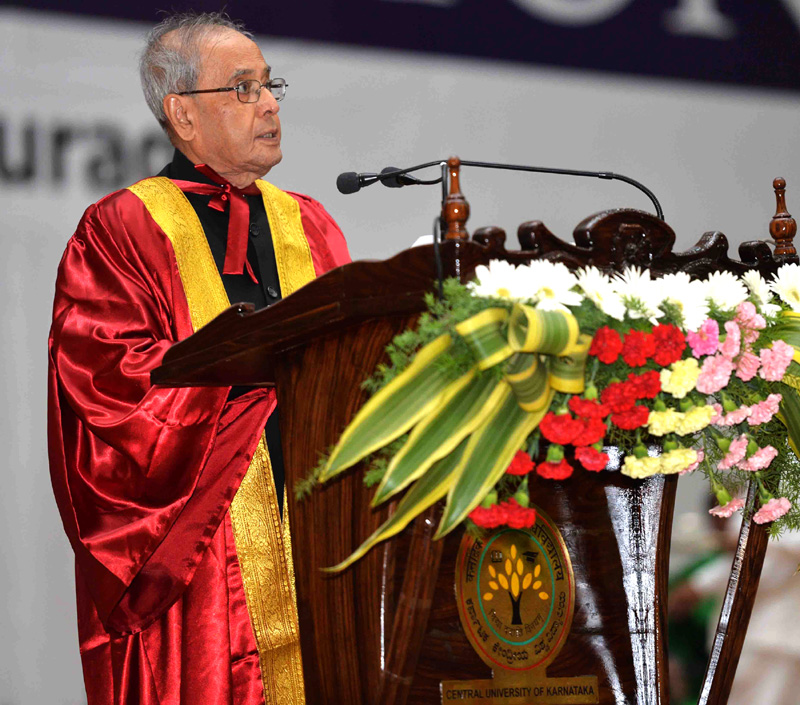 The President, Mr. Pranab Mukherjee addressing at the 2nd Convocation of Central University of Karnataka, at Kalaburagi, Karnataka on December 22, 2015.

There Can Be No Health Without Mental Health

Bangalore (PIB-GR-TYP-BIN): The President of India, Mr. Pranab Mukherjee dedicated the National Institute of Mental Health and Neuro-Sciences(NIMHANS), Bangalore to the nation as an Institute of national importance on December 22. He also inaugurated the Magneto Encephalography Research Center and NIMHANS Heritage Museum on the occasion.

Speaking on the occasion, the President said there is increasing realization across the world today that there can be no health without mental health. India’s first comprehensive mental health policy was notified in last October on the occasion of World Mental Health Day which covers several aspects of mental health – including the rights of the mentally ill, the need to provide support to care givers, decriminalization of suicide – and other progressive policy initiatives. The policy, supported by the “Mental Health Action Plan 365”, spells out the specific roles of the Central Government, the State Governments, local bodies and civil society.

The President said the Government must take care to ensure that due priority is given to human resource development in the field of mental healthcare and delivery. We also need to systematically devise innovative methods for enhancing the delivery of mental health care services. The stigma experienced by persons who are mentally ill should be addressed and it should be ensured that they are not subjected to neglect and marginalisation.

The President expressed happiness that NIMHANS has taken a number of initiatives such as setting up a Brain bank”, a Free Legal Aid Clinic in its outpatient block, Centre for Well Being, Centre for Public Health and Centre for Addiction Medicine etc. He stated that these innovations as well as the NIMHANS Community Mental Health and Rehabilitation Centre and Neuro-biology Research Centre (NRC) are successful models that could be replicated in other parts of the country.