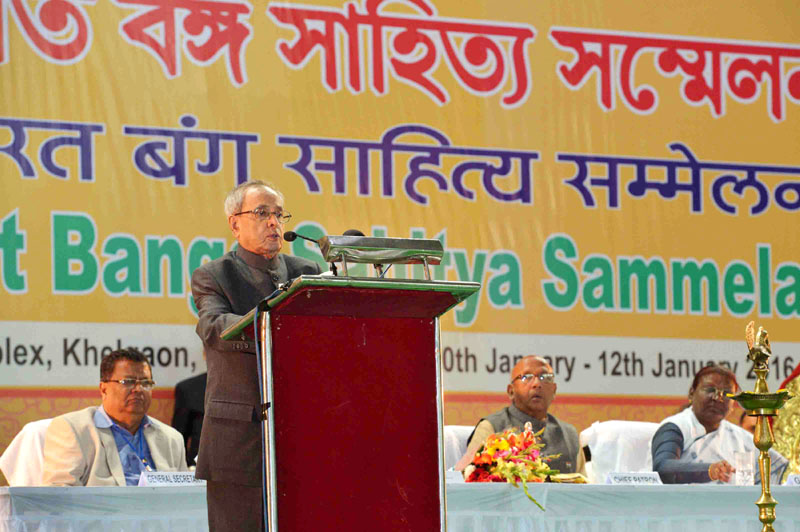 The President, Mr. Pranab Mukherjee addressing at the inauguration of the 88th annual conference of the Nikhil Bharat Banga Sahitya Sammelan (NBBSS), at Ranchi, Jharkhand on January 10, 2016. The Governor of Jharkhand, Mrs. Draupadi Murmu is also seen.

Speaking on the occasion, the President said he had been closely involved with the organization for the last three decades. He said the great traditions of Bengali literature, language and culture originated from the period of ‘Charyapada’ a Bengali compilation that was discovered by the noted scholar, Haraprasad Shastri in Nepal in 1907.

The President said Nikhil Bharat Banga Sahitya Sammelan, initially known as Prabasi Banga Sahitya Sammelan, was born in 1922 and the next year itself, in 1923, in its Varanasi session it was patronized by Rabindra Nath Tagore. Songs and music composed by Rabindra Nath and Quazi Nazrul Islam along with other luminaries played a major role in nation building.

The President said the core element of Bengali literature is human being and its thinking. During the freedom movement it was Bengali literature that influenced our social thinking and social reforms as well as vice-versa. He named Michael Madhusudan Dutta, Bankim Chandra Chattopadhyay, Rabindra Nath Tagore and a host of other poets and writers who have contributed significantly in enriching our mind. The President urged all participants of the conference to continue contributing meaningfully towards preserving and encouraging Indian literature.