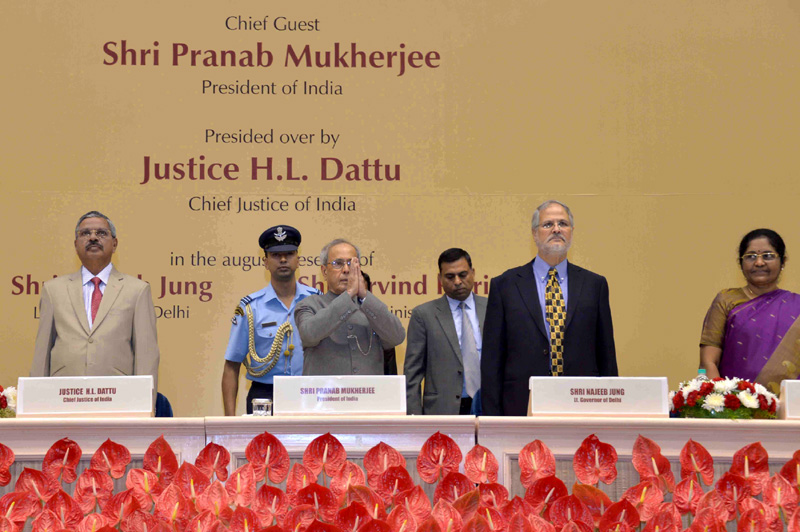 The President of India, Mr. Pranab Mukherjee at the inauguration of the Goldren Jubilee Celebrations of High Court of Delhi, in New Delhi on October 31, 2015. The Chief Justice of India, Mr. H.L. Dattu and the Lt. Governor of Delhi, Mr. Najeeb Jung are also seen.

Speaking on the occasion, the President said that he was happy to note that the theme of the Delhi High Court’s Golden Jubilee Celebrations is ‘JUSTICE FOR ALL’. This phrase, to his mind, implied empowerment of the weak and equal treatment of law irrespective of one’s individual identity.

The President said that judiciary, which is one of the three important pillars of our democracy, is the final interpreter of the Constitution and laws. It must help maintain social order by swiftly and effectively dealing with those on the wrong side of the law. As an upholder of the Rule of Law and enforcer of the right to liberty, the role of the Judiciary is sacrosanct. The faith and confidence people have in the Judiciary must be always maintained.

The President said that for justice to have meaning for the people, it must be accessible, affordable and quick. Access to justice for the poorest of the poor would ensure ‘Justice for all’. An affordable judicial system is a must for a country having many citizens at the bottom of the socio-economic pyramid. Quick delivery of justice is the third in the trinity of an effective judicial system, the other two being accessibility and affordability. Delay in administering justice is as good as denial. He emphasized that technology solutions can fasten the process of justice and make it easier for the litigants as well.

The President said the Delhi High Court has earned a reputation for its superior standards and lofty ideals. Landmark judgments passed by this Court have strengthened the legal and constitutional framework of our country. It’s Bench and the Bar are known for their intellectual wisdom and legal scholarship.

The President said that with each passing decade, the Delhi High Court has been served by Judges who have provided intellectual depth, vigour and vitality necessary to create a world-class institution. That this Court has contributed 25 illustrious Judges to the Supreme Court provides eloquent testimony to the high sense of duty prevailing amongst its Judiciary. He said that he was confident that Delhi High Court would always remain the sentinel of justice.