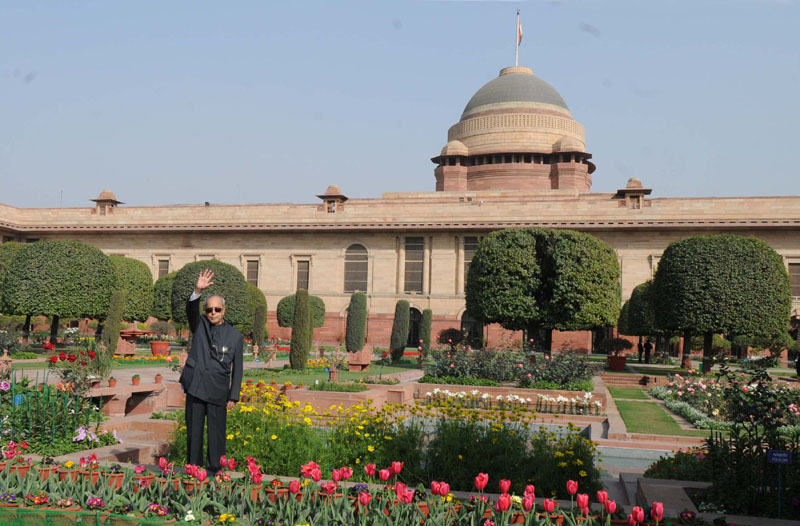 The President, Mr. Pranab Mukherjee gracing the opening of Mughal Garden, at Rashtrapati Bhavan, in New Delhi on February 11, 2016.

The Mughal Gardens will remain open for general public from February 12 to March 19, 2016 (except on Mondays which are maintenance days) between 0930 hrs to 1600 hrs. Members of the public will also be able to visit the Spiritual Garden, Herbal Garden, Bonsai Garden and Musical Garden.

Entry and exit for the general public will be from Gate No. 35 of the President’s Estate, close to where North Avenue meets Rashtrapati Bhavan. Visitors are requested not to bring any water bottles, briefcases, handbags/ladies purses, cameras, radios/transistors, boxes, umbrellas, eatables etc. Such articles, if any, will have to be deposited at the entry point.

The Mughal Gardens will be open exclusively on March 20 to special category of visitors viz farmers, differently abled persons, defence/para-military forces and Delhi Police personnel from 0930 hrs. to 1600 hrs. This entry and exit will also be through Gate No. 35.

The Tactile Garden will be open for visually impaired people on March 20 from 1100 hrs. to 1600 hrs. Entry and exit will be from Gate No. 12, situated on Church Road (next to the North Avenue).