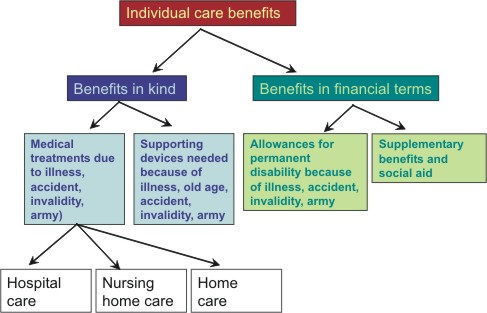 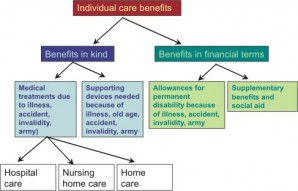 Graphic shows different forms of comprehensive individual care benefits according to the Swiss social security system. The Swiss enjoy the highest standard of living in the world and has arguably one of the best social security systems in the world. It even trumps the United States – the richest country on earth? They even include provisions within their system for dual citizens and those who have worked in Switzerland from other countries. Sadly the United States was forced to rewrite the language of its Social Security eligibility rules so they would not be conflict or penalized Americans who otherwise qualify under the Swiss program. On the Swiss side – well, nobody opts for American Social Security and Medicaid coverage because the Swiss system is so much more comprehensive to begin with.

The Congressional Record published a letter published from President Barack Obama recently regarding a bilateral agreement between the Swiss government and the United States dealing with social security. Which is being called a “Totalization agreement” to avoid double taxation of income for social security income.

That agreement has been recently updated with new language to help protect people in both countries – who would otherwise be penalized unfairly.

It still does not cover benefits under the U.S. Medicare program or the Supplemental Security Income (SSI) program.

The letter is as follows:

The U.S.-Swiss Agreement is similar in objective to the social security agreements already in force with most of the European Union member states, Australia, Canada, Chile, Japan, Norway, and the Republic of Korea. Such bilateral agreements provide for limited coordination between the United States and foreign social security systems to eliminate dual social security coverage and taxation and to help prevent the lost benefit protection that can occur when workers divide their careers between two countries. The principal updates encompassed in the Agreement include amendments to rules for entitlement to Swiss disability pensions paid to ensure equality of treatments between U.S. and Swiss nationals, updates to personal information confidentiality provisions, and modifications necessary to take into account changes in U.S. and Swiss laws since 1988.

I commend the U.S.-Swiss Agreement on Social Security and related documents.

See also: Moving within Europe – What about Social Security http://www.youtube.com/watch?v=r7ntV0P1A98