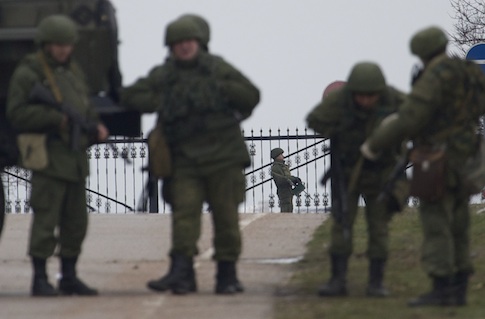 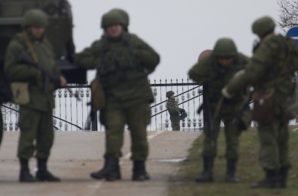 Russian troops in Crimea guard a Ukrainian air base.

The following is a letter from President Barack Obama declaring a national emergency with respect to the situation in Ukraine :

Pursuant to the International Emergency Economic Powers Act (50 U.S.C. 1701 et seq.) (IEEPA), I hereby report that I have issued an Executive Order (the “order”) declaring a national emergency with respect to the unusual and extraordinary threat to the national security and foreign policy of the United States posed by the situation in Ukraine.

The order does not target the country of Ukraine, but rather is aimed at persons–including persons who have asserted governmental authority in the Crimean region without the authorization of the Government of Ukraine–who undermine democratic processes and institutions in Ukraine; threaten its peace, security, stability, sovereignty, and territorial integrity; and contribute to the misappropriation of its assets. The order blocks the property and interests in property and suspends entry into the United States of any person determined by the Secretary of the Treasury, in consultation with the Secretary of State:

.to be responsible for or complicit in, or to have engaged in, directly or indirectly, any of the following:

.actions or policies that undermine democratic processes or institutions in Ukraine;

.actions or policies that threaten the peace, security, stability, sovereignty, or territorial integrity of Ukraine; or

.misappropriation of state assets of Ukraine or of an economically significant entity in Ukraine;

.to have asserted governmental authority over any part or region of Ukraine without the authorization of the Government of Ukraine;

.to be a leader of an entity that has, or whose members have, engaged in any activity described above or of an entity whose property and interests in property are blocked pursuant to the order;

.to have materially assisted, sponsored, or provided financial, material, or technological support for, or goods or services to or in support of, any activity described above or any person whose property and interests in property are blocked pursuant to the order; or

.to be owned or controlled by, or to have acted or purported to act for or on behalf of, directly or indirectly, any person whose property and interests in property are blocked pursuant to the order.

I have delegated to the Secretary of the Treasury the authority, in consultation with the Secretary of State, to take such actions, including the promulgation of rules and regulations, and to employ all powers granted to the President by IEEPA as may be necessary to carry out the purposes of the order. All agencies of the United States Government are directed to take all appropriate measures within their authority to carry out the provisions of the order.

I am enclosing a copy of the Executive Order I have issued.