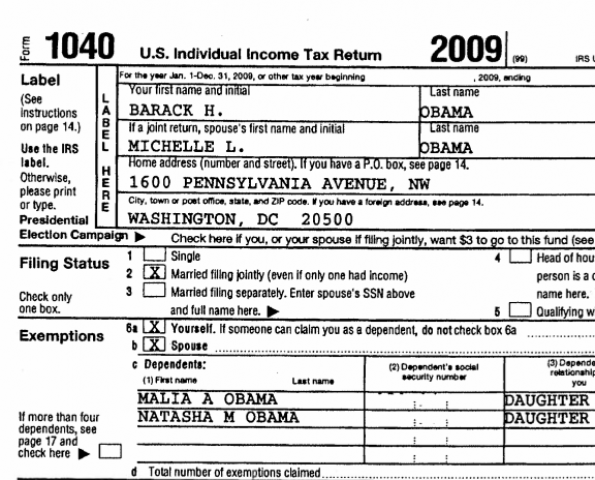 The White House today presented the actual PDFs of President Barack Obama’s tax return on national tax day. Read below for their highlights.

President Barack Obama and First Lady Michelle Obama reported income of $5.5 million, with major donations to 40 different charities, including the United Negro College Fund, The Posse Foundation, and the Clinton – Bush Haiti Fund. Details below from the blog post:

Today, the President released his 2009 federal income and gift tax returns. He and the First Lady filed their income tax return jointly and reported an adjusted gross income of $ 5,505,409. The vast majority of the family’s 2009 income is the proceeds from the sale of the President’s books. The Obamas paid $1,792,414 in federal income tax. The President and First Lady also reported donating $329,100 to 40 different charities. The largest reported gifts to charity were $50,000 contributions to CARE and the United Negro College Fund. In addition, the President donated his $1.4 million Nobel Prize funds to 10 charities. The President and First Lady also released their Illinois income tax return and reported paying $163,303 in state income taxes.

The Internal Revenue Code provides that if the recipient of the Nobel Prize directs the Nobel Committee to donate the prize income directly to charity, as the President did, the recipient does not have to recognize the prize as income on his federal income tax return. The President is not permitted to take a charitable deduction on the value of the prize since it is not included in his income.