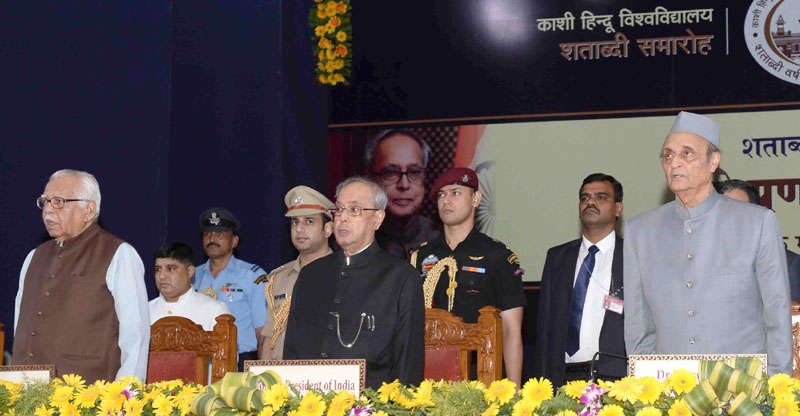 The President, Mr. Pranab Mukherjee at the Centenary Year Celebrations of the Banaras Hindu University (BHU), at Varanasi, in Uttar Pradesh on May 12, 2016. The Governor of Uttar Pradesh, Mr. Ram Naik is also seen.

New Delhi (PIB-GR-TYP-BIN): The President of India, Mr. Pranab Mukherjee attended the Centenary Year Celebrations of Banaras Hindu University and delivered the Centennial Address at Varanasi on May 12.

Speaking on the occasion, the President said by 2030 more than half of India’s population will be in the working age bracket. The so called demographic dividend is a double-edged sword. Our huge workforce can be an asset or a liability. It will be an asset only if we can provide quality education and skills training. If we can enhance the employability of our youth, we can become suppliers of workforce to the world.

The President said research and innovation needs to be made a national priority. It is critical that we make substantive investments in research and development as well as in our institutions of higher learning. Only with such investments can India join the ranks of leading countries of the world.

The President paid homage to Pandit Madan Mohan Malaviya on the occasion and said Bharat Ratna Pandit Malaviya was one of the tallest leaders of India’s freedom struggle. He said the Mahamana decided wisely to establish the University in Kashi because the city was not merely a geographical expression but a name which ignites minds as a place which has nurtured the growth of civilization.

The President said Malaviyaji could foresee the need for a university to produce a pool of professionally trained scientists, engineers, social workers, political thinkers, philosophers and academicians who would contribute to nation-building. He wanted students to develop a scientific outlook, and at the same time, retain the deep connect with our rich indigenous culture and knowledge.

The President praised BHU for turning itself into a great centre of learning with around 32,000 students, half of them living on campus making it the largest residential University in Asia. He praised the architectural beauty of its buildings, the greenery of the campus and the fact that it provided education for both worldly progress and inner growth.