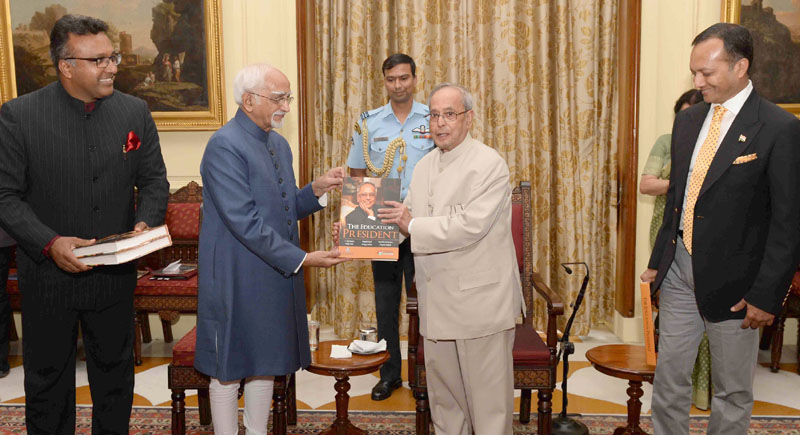 The President, Mr. Pranab Mukherjee receiving the first copy of the book “The Education President” published by the International Institute for Higher Education Research of the OP Jindal Global University from the Vice President, Mr. M. Hamid Ansari, at Rashtrapati Bhavan, in New Delhi on June 08, 2016.

New Delhi (PIB-GR-TYP-BIN): The President of India, Mr. Pranab Mukherjee received the first copy of a book titled “The Education President” at a function held in Rashtrapati Bhavan on June 8. He received the book from Vice President, Mr. Mohammad Hamid Ansari who formally released it.

The book published by the International Institute for Higher Education Research & Capacity Building, OP Jindal Global University highlights President Mukherjee’s contribution to the field of higher education as Visitor to 116 institutions of higher learning in India.

The President said India has a large higher education network comprising 757 universities and over 38,000 colleges. However, issues relating to quality and excellence are one of the biggest challenges, yet to be addressed comprehensively. We must keep up with our own past. India could boast of having universities like Nalanda, Takshashila, Vikramashila, Valabhi, Somapura and Odantapuri, which were global leaders in various times between the sixth century BC and twelfth century AD. Students and teachers from around the world attended these institutions. Today, in the absence of adequate number of good quality educational institutions, around 2 lakh students go overseas to study.

Similarly, while our teachers and students are both very talented, no Indian since CV Raman in 1930 has won the Nobel Prize from an Indian university. The President said India pays minimum attention to research. Only 0.6 per cent of our GDP is spent on research as compared to 2.8 per cent of China’s 10.38 trillion economy, 3 per cent in Japan and 5 per cent in USA. If we have to create a knowledge society, we must invest more in research and development.

The President said advanced societies recognize and honour scholars and teachers. There should be cross fertilization of ideas and academic freedom. It is with this purpose that he has taken with him delegations of Vice Chancellors and other heads of educational institutions on his State visits abroad.

The President thanked the International Institute of Higher Education Research and Capacity Building of O.P. Jindal Global University for recognizing the work that has been done in last four years by Rashtrapati Bhavan and publishing it in the form of this informative and analytical book. He said that his interaction with universities, faculty and students has enriched his life and expended horizons.

Filed under: Education, News
Share Tweet Pin G Plus Email
previous article: A Wise Man Will Work To Save The Lives Of Those Around Him
next article: Private Providers In Higher Education Have Largely Grown In A Policy Vacuum: Vice President