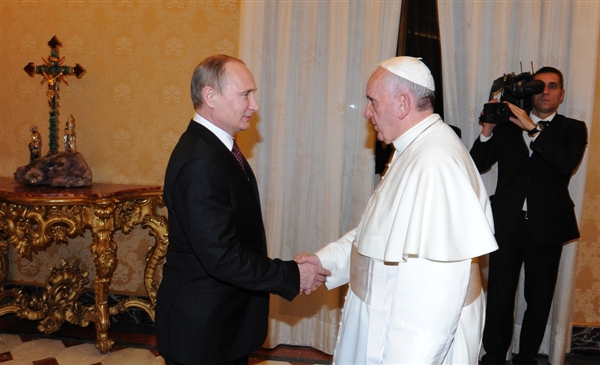 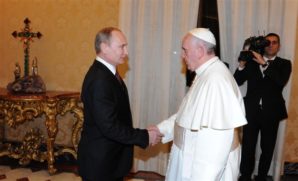 Putin meets the Pope in Rome to discuss Syria and US involvement in supplying weapons to terrorists in that country.

Russian President Vladimir Putin met Pope Francis in the Vatican today for talks that were expected to focus on the ongoing civil conflict in Syria being fueled in part by by the United States and other gulf states in an effort to overthrow President Bashar Al- Assad.

Putin’s spokesman said the meeting appears to go very well and that the encounter lasted twice as long as had been planned.

The two discussed the religious dimensions of the conflict and aspects of religious hate and intolerance from U.S. backed al-Qaeda fighters who seem to be targeting Christians in the conflict when they are not killing each other or eating people’s hearts out (see video: Fighter cuts out and eat human heart from victim http://www.youtube.com/watch?v=9KXXUzWARtk).

See also Christian in Syria fearful of FSA and the US http://www.youtube.com/watch?v=lBQkoNzj-8o

This falls under the category of religious terrorism which is defined as the deliberate use of violence against civilians for religious ends.

It should be noted that for centuries religion has been a source of violence terrorism and war.

Religion is also a major force behind terrorism’s rising lethality in Syria and around the world.

The two exchange thoughts on how to dissuade the United States and other nations from funding terrorists in that ongoing conflict between Sunni and Shia’s  – which is only exacerbating the situation in many respects and making peace much more difficult to achieve.

Putin and Italian President Giorgio Napolitano were also due to hold talks today as well.

Putin and the pontiff exchanged gifts, and the pope asked the Russian leader to send his regards to Patriarch Kirill, who heads the Russian Orthodox Church.

Filed under: News, World
Share Tweet Pin G Plus Email
previous article: Hate crimes trends downward in U.S. according to FBI statistics
next article: Give the Gift of Health to Your Pet this Holiday Season