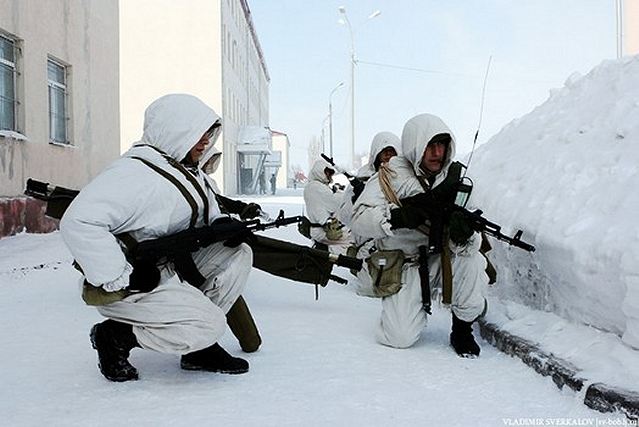 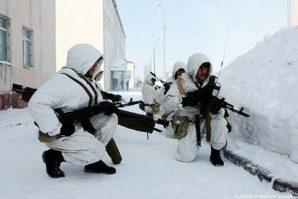 On April 22, 2014 President Vladimir Putin held an expanded meeting of the Security Council On the Implementation of Russia’s State Policy in the Arctic in the Interests of National Security.

I have just had a meeting with our young polar explorers. As you may know, they spent some time skiing to the North Pole.  Now, in a broader group let us consider a related topic – let us discuss issues of implementing state policy in the Arctic.

This region has traditionally been a sphere of our special interest. It is a concentration of practically all aspects of national security – military, political, economic, technological, environmental and that of resources.

According to experts, the overall energy reserves of Russia’s Arctic section exceed 1.6 trillion tons, while the continental shelf holds almost a quarter of all the hydrocarbon resources on the entire world sea shelf.

For dozens of years, systematically Russia has been strengthening, enhancing its presence, its positions in the Arctic. Our goal is not only to fully restore these positions, but also to make them even stronger. We have to strictly adhere to this vector of state policy, of our strategic planning.

We are already implementing major projects in the Arctic.  Thus, we are reviving the Northern Sea Route: over 1.5 million tons of cargo were carried along it in 2013. Only a few years ago the figure was slightly over half a million tons.

The construction of the Arctic seaport of Sabetta – a future checkpoint on this route – is proceeding at a good pace. A major liquefied natural gas facility is being created at the South Tambey field in Yamal. Our companies are beginning operations on the Arctic sea shelf. Just  a few days ago the first oil was shipped from the Prirazlomnaya offshore platform in the Pechora Sea.

This is one of the major – if not the major project in the area: a huge platform featuring latest technology and materials – all firsts, an enormous project, practically our first step in developing the Arctic sea shelf.

We are strengthening our military infrastructure in the region.  Primarily this is done by restoring a number of airfields beyond the Arctic Circle and the military base on the New Siberian Islands. We are optimising the army groups and naval forces in the area.

At the same time we are expanding our information, research and humanitarian presence in the Arctic. Very important in this respect were the international forums Arctic – Territory of Dialogue held on Russia’s initiative.

I would like to stress that this country is interested in the region’s sustainable development based on cooperation and absolute respect of international law. With this goal in view, we maintain a constant exchange with our partners on issues pertaining to the Arctic, and we fully comply with international requirements for enhancing environmental security in the region. Within the framework of the Arctic Council, we resolve issues pertaining to cooperation in border areas, maritime transportation, and rectification of consequences of accidents in hydrocarbon production on the marine shelf.

Meanwhile we are aware of the growing interest in the Arctic on the part of the international community. Ever more frequently, we see the collision of interests of Arctic nations, and not only them: countries far removed from this area are showing a growing interest as well.

We should also bear in mind the dynamic and ever-changing political and socioeconomic situation in the world, which is fraught with new risks and challenges to Russia’s national interests, including those in the Arctic.

I would like to repeat that, given the circumstances, we need to take additional measures so as not to fall behind our partners, to maintain Russia’s influence in the region and maybe, in some areas, to be ahead of our partners. These are our priority tasks. What do I mean?

Firstly, we need to improve quality of government control, of decision-making. This requires the creation of a single centre of responsibility for the implementation of our policy in the Arctic. I would like to stress here that we do not need a cumbersome bureaucratic structure; we need a flexible agency that would help to better coordinate the activity of ministries and agencies, of the Russian regions and businesses.

It may be feasible to create an agency that would be similar in status to a government commission with broad authority, the way it was done for the Far East. We will consider this today. I would like the Government Cabinet to make specific proposals on the results of this discussion.

Secondly, we need to consider very carefully how we intend to implement measures of the state programme Socioeconomic Development of the Arctic Zone of the Russian Federation through to 2020 (the Government has prepared the state programme), how we will provide the resources required to resolve the tasks facing us in this area. I would like the Government to provide sufficient funding for the above program starting in 2017.

Next. A pressing issue that requires careful work is the legal formalisation, in line with international law, of the outer boundary of Russia’s continental shelf in the Arctic Ocean.

We have proven experience in resolving such issues. Let me remind you that at the 33rd session of the UN Commission on the Limits of the Continental Shelf held in March, Russia spoke of its right to part of the Sea of Okhotsk that was earlier considered open – this is a 52,000 square kilometre area, the bottom of which is the continuation of Russia’s continental shelf.

Based on scientific data, our experts found strong arguments in favour of Russia’s right to this area. As a result, at its Plenary Session the Commission agreed with our reasoning and made the required recommendations.

Our experts should act in the exact same way while conducting bilateral and multilateral consultations with governments of the Arctic nations; they should hold on to every area of the Arctic continental shelf of Russia and its marine basins.

Fourth. We need to develop the best economic model for the development of the Northern Sea Route, so that by 2015 we raise its cargo tonnage up to 4 million tons a year. We have to speed up the construction of ice-class vessels and of new nuclear- and diesel-powered icebreakers (plans have been developed; we should carefully control their implementation). We also need to complete the creation of a modern navigation, communication, technical maintenance and emergency relief infrastructure along the entire length of the Northern Sea Route.

Another task that we have mentioned on numerous occasions: we have to make sure shipping companies find it profitable and convenient to fly the flag of Russia, so that the bulk of cargo shipments in the Arctic, particularly along the Northern Sea Route, is conducted by vessels under Russia’s jurisdiction.

The fifth task is to maintain environmental security. The ecological system of the Arctic, as we all know, is fragile; therefore there should be regular environmental monitoring. We should definitely minimise all environmental risks during the construction of production and maintenance infrastructure, especially in the course of developing the Arctic shelf, and develop an early warning and response system for cases of oil and petroleum product spills and leaks. Prirazlomnaya, which I have already mentioned, has zero waste. This means that we are capable of implementing projects of such quality, and this should become norm.

Environmental protection is an essential condition for preserving the unique life-style of the northern indigenous peoples. Their wellbeing and stable development are among our key socioeconomic tasks in the region.

Finally, the sixth main area is ensuring comprehensive security of the Russian Arctic zone. I have already mentioned the military component. Oil and gas production facilities, loading terminals and pipelines should be reliably protected from terrorists and other potential threats. Nothing can be treated as trivia here. All security issues should be practiced in the course of regular joint exercises and training involving units of the Defense Ministry, Emergencies Ministry and other services.

We should also improve reliability of our Arctic border protection, including through strengthening the marine component of the border patrol groups of Russia’s Federal Security Service. At the same time, we should enhance the military infrastructure. In particular, I am referring to the creation in our section of the Arctic of a single basing structure for new generation surface vessels and submarines.

In conclusion, I would like to stress that we will continue to invest heavily in the Arctic, to resolve issues dealing with this area’s socioeconomic development, and strengthen security. This is a matter of our national security. We have said this many times. We have already taken serious steps in this direction. Let us see where we are and what needs to be done.”