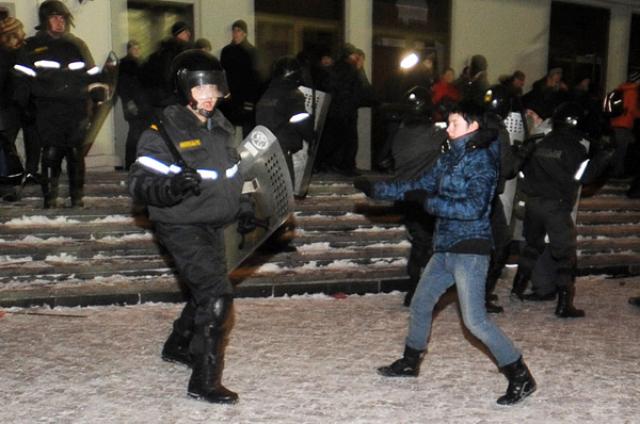 Since 19 December police and KGB have been raided media offices and private flats of journalists and photograpers even during Christmas and New Year festivities, sealing
offices and removing computers and other equipment.

This is the reality in Belarus under President Lukashenka. The Exiled Journalists Network calls international community support Belarusians in their fight for freedom to provide and to receive fair information.

During 19 December unrest in the Belarus capital Minsk, riot police beat and  arrested dozens of journalists, treating them as if they were participants in the street rallies and personal enemies of the Lukashenka regime. Among those detained were correspondents from Polish "Gazeta Wyborcza",
France Press, US-funded "Liberty radio", Russian "Novaya Gazeta" and many Russian and Belarusian
journalists.

Two of them – Natalya Radzina from Charter97 and Irina Khalip from Novaya Gazeta – are still in a KGB remand centre beiing treated as suspects of organizing and participating in riotes inder article 293 of the Belarus Penal Code, facing a possible maximum penalty of 15 years in prison. Many of those already jailed are reported to have gone on hunger strike.

Correspondents from "Associated Press", "New York Times", "Deutsche Welle", Austrian "News at", "Liberty radio", "Russia Today", Russian "Ren-TV" are reported to have been injured by the police during 19 December events. Police and KGB have since combed media offices and the personal flats of journalists, confiscating cameras, laptops, memory sticks and dictophones. Among them the EU-funded "Belsat", "Euroradio", private newspaper "Nasha Niva", the Belarus centre of the
International PEN Club, office of Charter97 site. (For more details
see www.baj.by).

Belaris needs a free press if it is to become a free society. If you
wish to support Belarus media, ask for a proper investigation of these violations of press freedom during and after the recent elections.
Please write to Aleksandr Mikhnevich, the Belarusian Ambassador in the UK .

ps If you are not in the UK, please contact any local Belarus embassy.