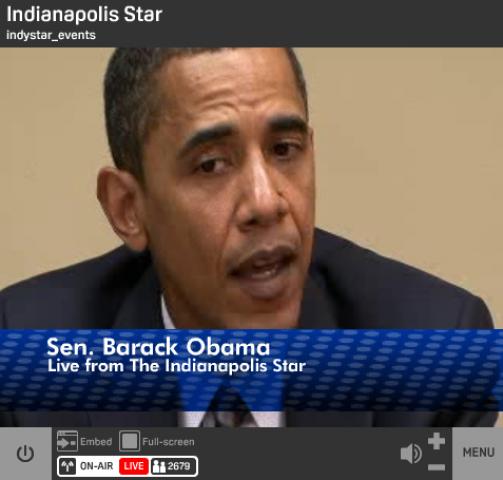 During a live video broadcast today, Senator Barack Obama failed to come up with any significant differences in policy between himself and rival Democratic presidential candidate Senator Hillary Clinton.

During the press conference hosted by the Indy Star, a journalist asked for policy differences to convince Hoosiers to vote for Obama over Clinton.  Senator Obama could only come up with one example, itself not a true difference but an alleged case with Obama was the "first" to come up with the proposed middle class tax cut, which was adopted by Clinton three months later.

In response to the question Obama replied that, "It’s tough, because a lot of our differences get blurred during the campaigns." He conceded that there is “not a huge ideological difference between myself and Senator Clinton," and that even regarding their much-debated health plans, "95% of our plans are the same. We have both talked about setting up a government plan that is optional that people can buy into if they don’t have health insurance."

In his opening remarks, Obama joked that he was "still here, not voted off the island yet." He also emphasized that his "home state of Illinois shares many economic challenges" with Indiana, and that while in urban areas the "economy…is diversifying and doing well… the rest of the state is a mixed bag. Towns that have been relying on manufacturing are getting pummeled."

Obama’s proposed solutions includes investment in infrastructure, education and research and development to create "jobs of the future."

Speaking to the journalists and publishers in the room, Obama acknowledged that with the next election, "Indiana will be getting a lot of attention," which is “good for publishers of newspapers as well."

Echoing a common refrain of his campaign, Obama emphasized that between Senator Clinton and himself, "our biggest difference has to do with our philosophy on what ails Washington."  Obama believes the system is mired in corruption and controlled by an old boys network, while he said that Clinton feels the “system isn’t broken…you have the wrong party pushing the levers.”

The broadcast was made possible via Mogulus broadcast platform, which also powers GroundReport TV.