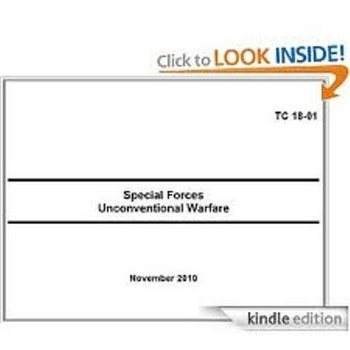 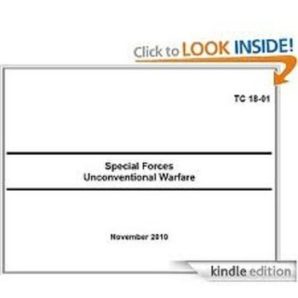 A US military training manual exposes the use of terrorism techniques.

It’s been described as “Americans handbook on state sponsored terrorism” by Russian foreign intelligence officials. It is basically a US military training manual used extensively by US Special Forces at Ft. Bragg, N.C. As such it is asecret manual not intended for the public. It carries an ominous warning:

There is also a “DISTRIBUTION RESTRICTION”, which otherwise disallows publication under most circumstance:

“Distribution authorized to U.S. Government agencies and theircontractors only to protect technical or operational information from automatic dissemination under theInternational Exchange Program or by other means. This determination was made on 1 August 2010.Other requests for this document must be referred to Commander, United States Army John F. KennedySpecial Warfare Center and School, ATTN: AOJK-DTD-SF, 2175 Reilly Road, Stop A, Fort Bragg, NC28310-5000.”

This, of course is a laughable joke, since the information has already been compromised

A friend wrote to the address and was “denied a copy of the document” by the Commander of the US Army JFK Special Warfare Center, which you could easily find online?

“They still treat it as if the information is not available”, says Mark Vincent of Charlotte, who was able to obtain the document via a friend at an Army Surplus store in Fayetteville, N.C.

While the specific details of the secret training manual “compromise” is unknown – it was speculated that It was compromised by Special Forces (SF) soldiers at Fort Bragg who blatantly disregarded orders and warning and took the manual to Fayettville, N.C. asa joke and left it at a strip club, after getting really drunk – where it was subsequently discovered and given over to foreign intelligence operatives who paid a drug addict an undisclosed amount in cash for it…

More likely it was compromised by someone at the John F. Kennedy Special Warfare school, when it was shared or given to a foreign student training at the facility.

Either way the proverbial “cat is out of the bag”…

Today you can find references to this training manual all over the web.

According to a friend in Russia a copy sits in the library of the Russian Foreign Intelligence Service (SVR) Headquarters building in Moscow.

The manual details a list of approved terrorism techniques, including:

Page 7: Definition of Insurgency: “An organized movement aimed at the overthrow of a constituted government through use of subversion and armed conflict. Code: JP 3-05”

Section 1-22: “1-22. A genuine willingness to collaborate and cooperate with the United States must exist within the leadership of the indigenous force.”

“Terrorism by any other name is still terrorism”, say B. Pastor of Charlotte, N.C., when describing information found in a US military training manual. “It’s a playbook for how to over throw a government. What is interesting if these techniques where used in America against the federal government it would be termed terrorism”, he said.

A complete copy of the secret manual can be found at the website Public Intelligence: