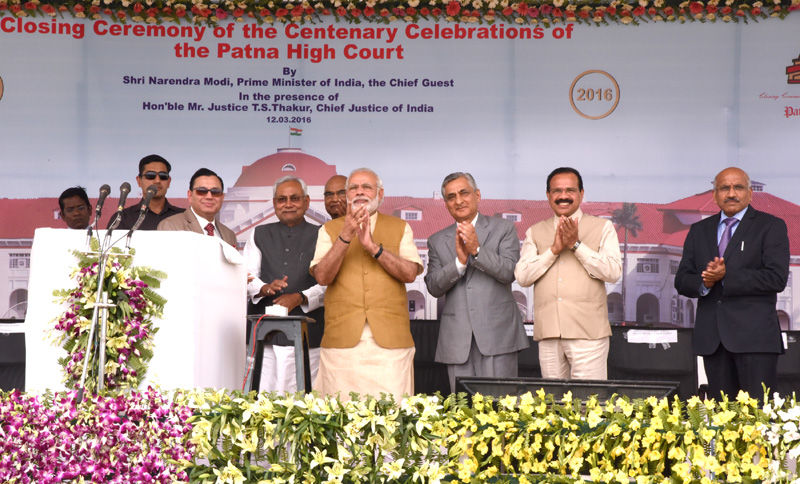 The Prime Minister, Mr. Narendra Modi at the closing ceremony of Centenary Celebrations of the Patna High Court, in Bihar on March 12, 2016. The Governor of Bihar, Mr. Ram Nath Kovind, the Union Minister for Law & Justice, Mr. D.V. Sadananda Gowda, the Chief Minister of Bihar, Mr. Nitish Kumar, the Chief Justice of India, Mr. Justice T.S. Thakur and other dignitaries are also seen.

Strive To Establish New Benchmarks In The Years Ahead

Patna (PIB-GR-TYP-BIN): The Prime Minister, Mr. Narendra Modi delivered an address at the Closing Ceremony of the Centenary Year celebrations of Patna High Court on March 12.

Addressing the gathering at Patna High Court, the Prime Minister spoke of the great heights achieved by this Court in the last one hundred years. He said that the best aspects of these one hundred years should be taken forward. He added that this was an occasion for fresh resolve, and called upon all stakeholders to strive to establish new benchmarks in the years ahead.

The Prime Minister spoke of the great power of technology, and said the bar, bench and court should all be techno-savvy. The active use of technology will improve the quality of both arguments and judgements, he added.