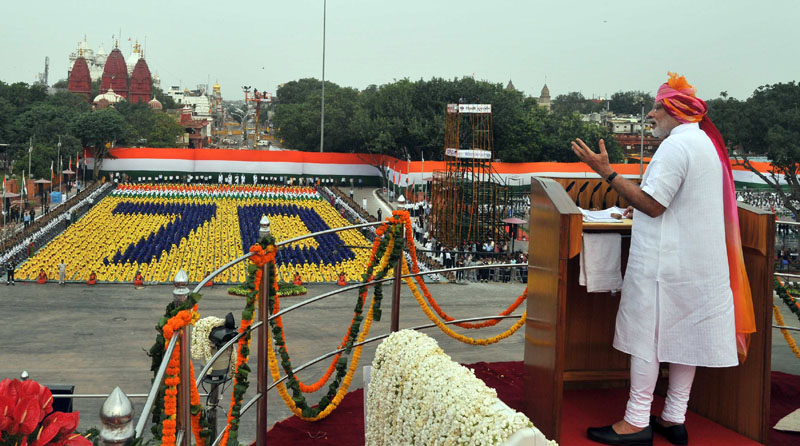 The Prime Minister, Mr. Narendra Modi addressing the Nation on the occasion of 70th Independence Day from the ramparts of Red Fort, in Delhi on August 15, 2016.

New Delhi (PIB-GR-TYP-BIN): The Prime Minister, Mr. Narendra Modi addressed the nation from the ramparts of the Red Fort on 70th Independence Day on Aug 15.

Mr. Narendra Modi paid homage to Mahatma Gandhi, Sardar Patel, Pandit Jawaharlal Nehru, and countless people, who sacrificed their lives so that Swarajya could be attained.

He said that 125 crore Indians have now resolved to complete the journey from Swarajya to “Suraj.” He said the achievement of Suraj will require sacrifice, hard work, discipline, dedication and courage, and added that every institution from Panchayat to Parliament must work unitedly towards this goal.

The Prime Minister said that he wishes to focus not on the work done by the Government, but on its work-culture.

The Prime Minister defined various attributes of Suraj, such as Sensitivity, Responsibility, Accountability, Transparency, Efficiency and Good Governance. He illustrated each of these attributes through examples of the working of the Union Government, in areas such as online registration in major hospitals, promptness of income tax refunds, speeding up the process of passport delivery, faster company registrations, and ending interviews for Group C and Group D positions in the Government.

The Prime Minister mentioned how the speed of delivery in vital areas of governance had increased. In this context, he gave examples such as rural roads construction, renewable energy generation capacity, laying of transmission lines, and cooking gas connections.

The Prime Minister spoke of the scale on which work had been accomplished in certain areas, such as opening of 21 crore bank accounts under the Jan Dhan Yojana, construction of 2 crore toilets in rural areas, and electrification of 10,000 unelectrified villages in a short span of time.

On the subject of LED bulbs, the Prime Minister mentioned that their price had been brought down substantially to make them more accessible to the common man. He said that the widespread use of LED bulbs would result in huge saving of electricity.

The Prime Minister appreciated the farmers for ensuring sufficient foodgrain production despite two successive droughts. He said that the area under pulses cultivation has increased substantially this year. He explained the integrated approach that the Government has taken towards the agriculture sector, which includes focus on soil health cards, irrigation, solar pumps, seeds, fertilizers, and crop insurance.

The Prime Minister explained how his Government has been working to complete stalled or long pending projects, and is shortening the time required for project approvals in important sectors.

Giving illustrations of effective delivery, the Prime Minister mentioned clearance of sugarcane arrears, new LPG connections, and PSUs such as Air India and BSNL reporting operational profits. Mentioning the emphasis on transparency, the Prime Minister said subsidies are being better targeted to those that need them. He said international rating agencies have acknowledged the progress in key areas of governance.

The Prime Minister said the Government has taken a holistic, integrated approach towards welfare of women, which includes elements such as Beti-Bachao, Beti Padhao, Sukanya Samriddhi Yojana, and Ujjwala Yojana, to ensure the physical, educational and financial well-being of women. He mentioned several other Government initiatives in this regard.

In a strong message for social cohesion (Samaajik Ekta), the Prime Minister said every Indian must abide by the message of peace, oneness and brotherhood, given by great saints, philosophers and thinkers, such as Ramanujacharya, Mahatma Gandhi, and Babasaheb Ambedkar.

The Prime Minister said that various initiatives and programmes of the Government are all contributing to employment generation for the youth. He said that the Model Shop and Establishment Act will facilitate opening of shops on all days.

The Prime Minister said the Union Government does not hesitate in taking major decisions. In this context, he mentioned grant of One Rank, One Pension, declassification of files related to Netaji, and the Land Boundary Agreement with Bangladesh.

The Prime Minister strongly condemned those who were attempted to glorify terrorists as martyrs. He said the world will appreciate India’s humanitarian approach, and uniform condemnation of all terrorist activities.

The Prime Minister called upon the people to work with a common resolve to take the nation forward.

The Prime Minister announced some new initiatives. He said the pension for freedom fighters would be enhanced from Rs. 25,000 to Rs. 30,000 per month. He said the Government would work towards creation of museums and memorials dedicated to the Adivasi freedom fighters across the country. Government would bear expenses up to one lakh rupees for the poor, towards meeting the cost of hospitalization.