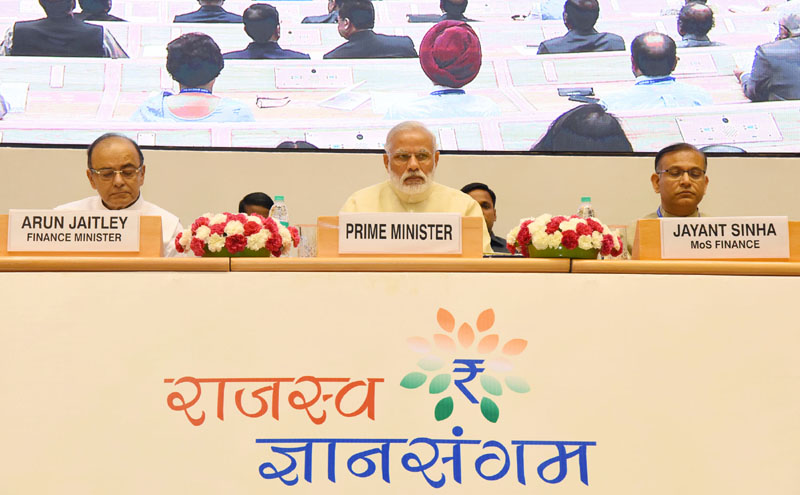 The Prime Minister, Mr. Narendra Modi at the inauguration of the ‘Rajasv Gyan Sangam’, the Annual Conference of Tax Administrators 2016, in New Delhi on June 16, 2016. The Union Minister for Finance, Corporate Affairs and Information & Broadcasting, Mr. Arun Jaitley and the Minister of State for Finance, Mr. Jayant Sinha are also seen.

‘India Is Today At A Unique Stage In Its History’

New Delhi (PIB-GR-TYP-BIN): The Prime Minister, Mr. Narendra Modi addressed tax administrators at the Rajasva Gyan Sangam on June 16. This is the first time that the two revenue boards – the Central Board of Direct Taxes (CBDT), and the Central Board of Excise and Customs (CBEC), are holding a simultaneous conference.

The Prime Minister began by inviting suggestions from officers. Some of the officers present, expressed their views on diverse subjects such as digitization, voluntary tax compliance, facilitation for taxpayers, increasing the tax base, upgradation of digital and physical infrastructure for tax administrators etc.

He encouraged the officers for a free and frank exchange of ideas during the Rajasva Gyan Sangam. He stressed that while there should be respect for the rule of law among all citizens, and even fear of the long arm of the law for those who evade taxes, people should not fear tax administrators.

He said that India is today at a unique stage in its history, and the high aspirations of its people need to be nurtured by the Government, so that they translate into the nation’s development.

He stressed the need for tax administrators to engender trust in the system. Citing the example of the “Give it up” initiative for voluntarily giving up gas subsidy, he said that the tax base too could be increased significantly, provided the tax administrators can demonstrate the leadership to bring about a change.

The Prime Minister outlined a five-point charter for tax administrators – RAPID: R for Revenue, A for Accountability, P for Probity, I for Information and D for Digitization. He urged the officers to turn the Gyan Sangam into a Karma Sangam, so that the ideas generated from this conference lead to concrete action on the ground.