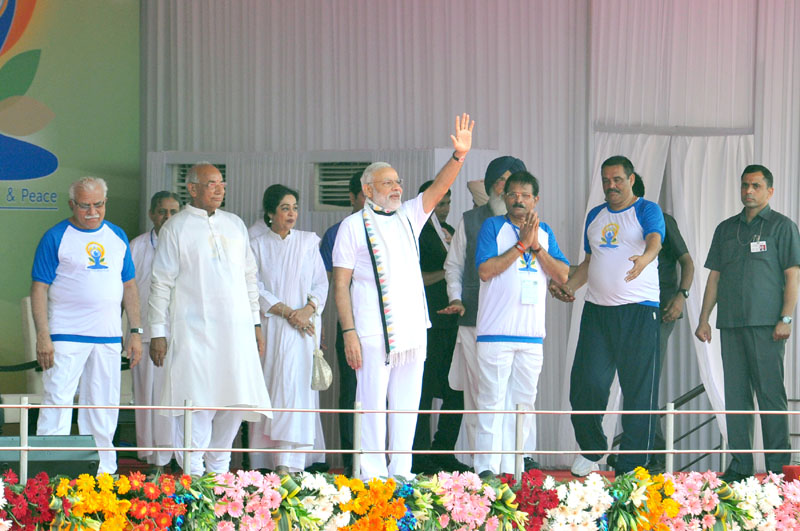 The Prime Minister, Mr. Narendra Modi on the occasion of the 2nd International Day of Yoga – 2016, at the Capitol Complex, Chandigarh on June 21, 2016. The Governor of Punjab and Haryana and Administrator, Union Territory, Chandigarh, Prof. Kaptan Singh Solanki, the Chief Minister of Punjab, Mr. Prakash Singh Badal, the Chief Minister of Haryana, Mr. Manohar Lal Khattar and other dignitaries are also seen.

Chandigarh (PIB-GR-TYP-BIN): The Prime Minister, Mr. Narendra Modi celebrated the second International Day of Yoga at Chandigarh on June 21, where he joined approximately 30,000 participants in a mass Yoga demonstration.

Addressing the gathering at the iconic Capitol Complex, the Prime Minister said that today, people in all parts of the country have connected with Yoga. He said that the world has come forward to support the idea of International Day of Yoga. He added that all sections of society too, have come together in this endeavour.

The Prime Minister said that the International Day of Yoga is a day linked to good health, and it has become a mass movement. He said that Yoga is not about what one will get, but it is about what one can give up. He said that with zero budget, Yoga provides health assurance, and does not discriminate between rich and poor.

The Prime Minister called for focus in the next one year, on how to mitigate diabetes through Yoga. He said that to honour those who are working to popularize Yoga, two awards will be instituted, one at the national level, and the other at the international level.

The Prime Minister walked amidst, joined, and mingled with the participants of the mass Yoga demonstration.

Filed under: Healthcare, News
Share Tweet Pin G Plus Email
previous article: The Logistics of The Wall from HBO’s Game of Thrones
next article: A Grand Rehearsal Takes Place At Capitol Complex Chandigarh