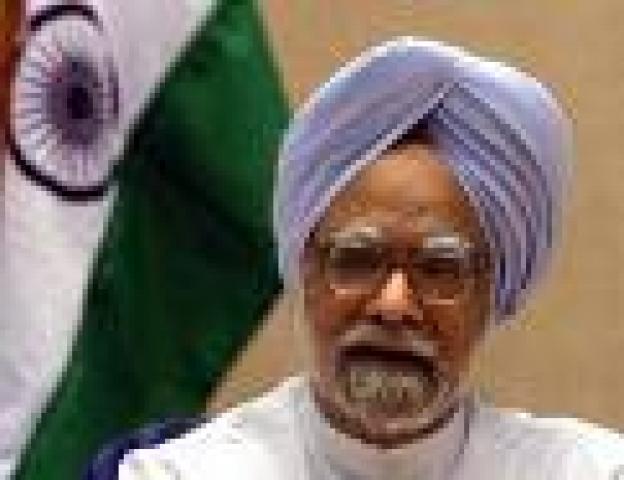 Prime Minister of India Dr. Manmohan Singh has expressed his desire to make Jammu and Kashmir a model state of the country even as he said that after the Lok Sabha elections, a comprehensive plan for accelerated development of the State would be formulated.

The Prime Minister said this during his first meeting with the Chief Minister Omar Abdullah on Thuresday in New Delhi  during which he discussed threadbare various issues pertaining to the development of the State. He appreciated the leadership qualities of the Chief Minister. The Chief Minister briefed Dr. Singh about the law and order situation in the State and said there was absolutely no difference of opinion between the State government and the Army on the issue of security. He said the government was satisfied with the action taken by the Army in the Bomai incident. He told the Prime Minister that the State government was acting on his commitment of zero tolerance on human rights violations and care was taken to ensure that the security forces were careful while disseminating their duties.

Dwelling at length on the issue of development plans for J&K, the Prime Minister called for prioritizing health and education sectors, adding the initiatives taken by the previous State government in these sectors must be taken forward. He called for empowerment of people at grassroots’ level and said the State government should hold Panchayat elections after Lok Sabha polls to achieve this objective.

The Chief Minister briefed the Prime Minister about vital development issues concerning the State. He requested Dr. Singh to consider Rs. 6,500 crore draft Annual Plan proposed for the year 2009-10 by the State government, adding that a meeting in this regard was held with the Planning Commission on March 18. He said the Planning Commission was supportive of the proposals and the projected plan size needs to be approved in view of the pressing needs of the State. The Prime Minister made a note of the demand of the Chief Minister in this regard.

The Chief Minister also discussed the issue of extension of Prime Minister’s Reconstruction Plan (PMRP) till the end of 11th Plan in 2011-12 so that the bigger projects like strengthening of T&D network and Rajiv Gandhi Grameen Vidyutikaran Yojana requiring more time will be completed, adding that certain projects like conservation of Tsomoriri, Mansar and Wular lakes are yet to be taken up. He also sought sanction for PMRP II based on State-specific projects, as most of the projects under PMRP are Central projects. He said the proposal has already been sent to the Prime Minister’s Office as well as the Planning Commission.

Regarding the Mughal Road Project, which also falls under PMRP, the Chief Minister told the Prime Minister that the revised project estimate of Rs. 634.85 crore, raised from Rs. 255 crore, needs to be funded by the Central government on 100 per cent basis. Presently, the project is funded on 50:50 basis between the State and the Central government. He added that the earlier estimate of Rs. 255 crore was not accurate.

The Prime Minister said he wanted early completion of the and added the Central government will favourably consider the proposal of the State government.

The Chief Minister also sought intervention of the Prime Minister for similar revision in Rs. 298.76 crore Conservation and Management Plan for Dal-Nagin Lake in Srinagar under the National Lake Conservation Plan and demanded an additional amount of Rs. 356 crore for acquisition of land, structures within the lake and purchase of lake cleaning machines. He said the rehabilitation and resettlement of the lake dwellers was not included in the project for which the additional funds are required. The same was agreed in principle and the Planning Commission was asked to examine the proposal of the State government, the Chief Minister added.

Dr. Singh said he has instructed the Planning Commission to hold a meeting with all the concerned on the issue.

The Chief Minister demanded release of Rs.1170 crore for the year 2008-09 as part of the Power Reforms Grant, a special dispensation given by the Central government as the same has not been released yet. Urging its early release, the Chief Minister said the State is in the midst of improvement of power infrastructure and the reforms grant should be continued for the next six years.

The Prime Minister observed that is woefully short of power, especially in winter. He said the development strategy needs a re-look. He also enquired from the Chief Minister the progress of the Kishenganga project and added that he was happy to learn that the implementation of Ladakh power projects was going on well.

On the issue of implementation of the Sixth Pay Commission recommendations, Dr. Abdullah sought the support of the Central government in view of the State government’s commitment to implement the revised pay structure. He said the annual financial implication on account of Sixth Pay Commission is Rs. 1,600 crore and the State would need the support of the Central government to meet this burden.

Mr. Abdullah called for restoring the Central package of incentives for the industrial sector, which has virtually withdrawn Central excise exemption for the Small and Medium Enterprises (SME) sector in the State, adding although a new package has been made available to the north-east from April 1, 2007, the same has not been extended to the . He said the revival of the incentive will help restore credibility and confidence of the industrial community as this has resulted in the State losing competitive edge over other states in the country where an industrial unit is 100 per cent exempt from payment of Central excise. The Prime Minister assured Mr. Abdullah that the demand would be looked into, adding there was a need to promote those industries which have readymade raw material available in the State.

While taking up the issue of allocation of coal block, the Chief Minister said the State should be allowed to set up thermal power plants at the pit-head. He also took up the issue of financing Baglihar II on the pattern of Baglihar I for which Rs. 2,500 crore is required.

Mr. Abdullah also sought additional allocation of 20,000 MT of food-grains for the State.