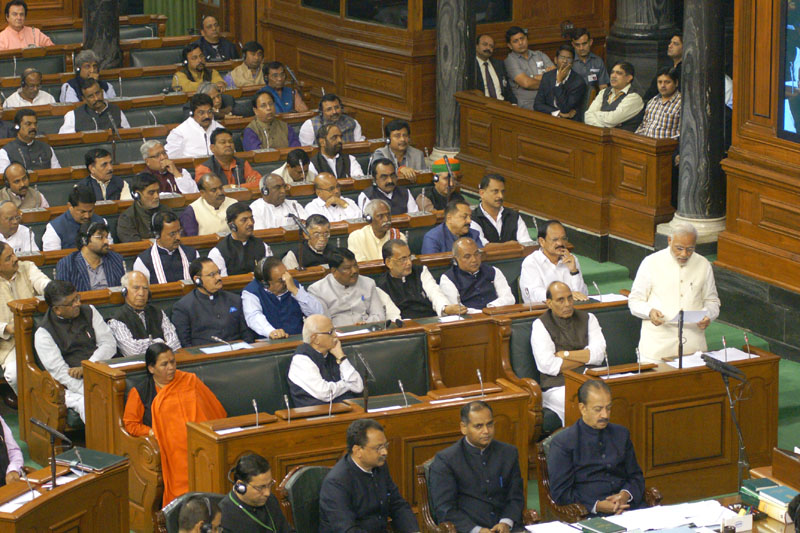 The Prime Minister, Mr. Narendra Modi speaking in the Lok Sabha, on the occasion of the special sitting to commemorate Constitution Day, in New Delhi on November 27, 2015.

New Delhi (PIB-GR-TYP-BIN): The Prime Minister Mr. Narendra Modi said the Constitution of India had ensured “dignity of Indians, and unity of India.” He was speaking in the Lok Sabha on November 27, on the occasion of the special sitting to commemorate Constitution Day, and the 125th birth anniversary of the architect of constitution, Dr B R Ambedkar.

The Prime Minister said that in a diverse country such as India, we need to actively take the provisions of the Constitution to the people. The observance of 26th November as Constitution Day reflects the Union Government’s thinking in that light, he said, adding that the concept will evolve over time.

He said that democracy becomes stronger through consensus and agreement; while the concept of majority and minority is always the last resort.

Filed under: Entitlements, News
Share Tweet Pin G Plus Email
previous article: We Trust And Believe In You To Ensure The Best: School Children To Environment Minister
next article: Need To Develop Strategies That Will Lead To Sustainable Productivity: Radha Mohan Singh