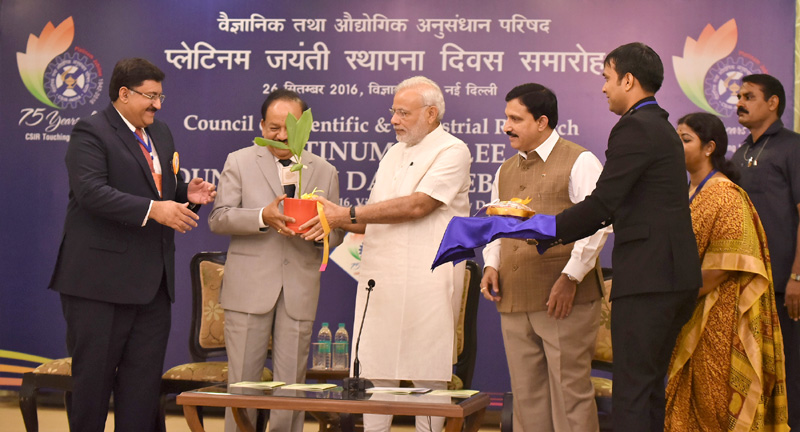 ‘Successful Technology Is One, Which Provides Benefit To The Common Man’

The Prime Minister visited an exhibition showcasing several initiatives of CSIR. He also dedicated some medicinal and aromatic plant varieties to the nation, interacted with farmers from five different locations across the country: Hyderabad, Cuddalore, Jammu, Jorhat and Palampur.

Speaking on the occasion, he said that starting with the indelible ink which is the hallmark of our democratic fabric, CSIR has left an indelible mark on every sphere of life. He urged CSIR to create an ‘Ease of doing Technology Business’ platform to bring in right stakeholders so technologies reach beneficiaries.

The Prime Minister said history bears witness to the fact that no nation can develop, unless it has the benefit of science and technology. He said that a successful technology is one, which provides benefit to the common man. Complimenting CSIR for it contributions to the nation over the last 75 years, the Prime Minister said he expected a lot more from the organization in the future. He said it is important to connect science with citizens in this century, which is technology driven.

The Prime Minister said an attempt should be made to give maximum opportunity to students to perform research at CSIR Laboratories. He added that CSIR has a key role to play in the emergence of new entrepreneurs in the country. Talking about agriculture productivity, he said that while he has always stressed “per drop, more crop,” another objective should be “an inch of land, and a bunch of crops.”

The Prime Minister later came down from the dais, to interact with schoolchildren who were present in the audience at Vigyan Bhawan.