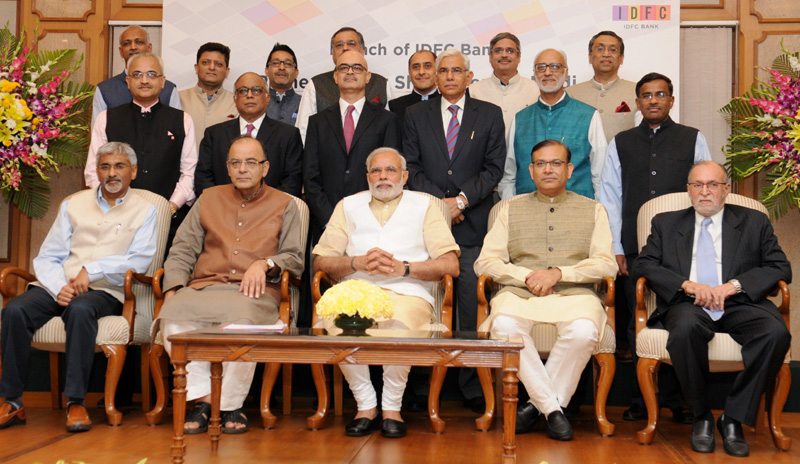 The Prime Minister, Mr. Narendra Modi in a group photograph at the launch of the IDFC Bank, in New Delhi on October 19, 2015.

New Delhi (PIB-GR-TYP-BIN): The Prime Minister Mr. Narendra Modi said that the banking sector is poised to achieve a big boost in growth in rural areas. He said this would be similar to the growth achieved by the telecom sector some years ago. The Prime Minister was speaking at the launch of the IDFC Bank in New Delhi on October 19.

The Prime Minister complimented IDFC for its successful journey of 18 years so far, and said that it was now embarking on a more challenging role, as it expands into banking, especially in the rural areas. He said that from helping to build infrastructure, the organization is now progressing to building lives (jeevan-nirmaan).

The Prime Minister said the entire banking sector is undergoing major transformation with the advent of latest technology, and the future of banking would not just be premises-less and paper-less, but also, eventually, currency-less, and this would help curb black money.

The Prime Minister described the banking sector reforms being undertaken by the Union Government, especially in areas such as senior appointments, creation of a bank board bureau, re-capitalization of banks, de-stressing of assets, empowering bank management through zero-interference, creation of a framework of accountability through Key Performance Indicators, and reform of governance of banks.