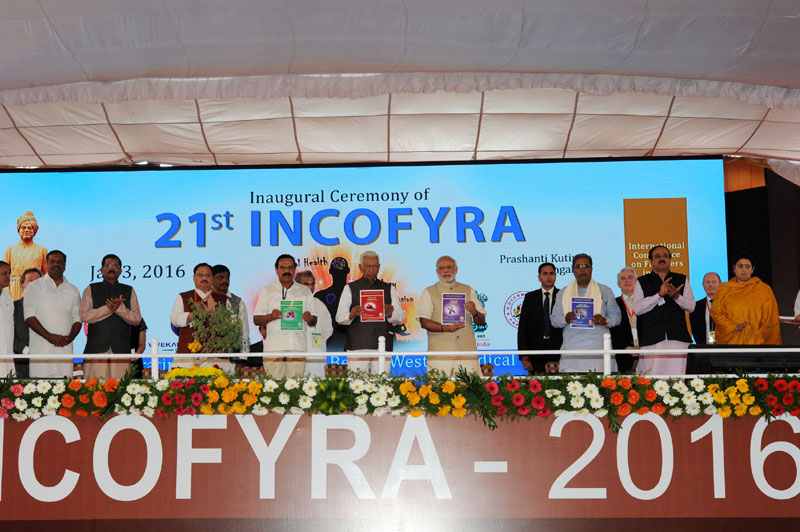 The Prime Minister, Mr. Narendra Modi at the inaugural ceremony of the 21st International Conference on Frontiers in Yoga Research and its Applications (INCOFYRA), in Bengaluru, Karnataka on January 03, 2016. The Governor of Karnataka, Mr. Vajubhai Rudabhai Vala and other dignitaries are also seen.

Bengaluru (PIB-GR-TYP-BIN): The Prime Minister, Mr. Narendra Modi, inaugurated the International Conference on Frontiers in Yoga Research and its applications, at Jigani, Bengaluru on January 3.

He unveiled the Foundation Stone for a hospital of integrative medicine. Some Excerpts From the speech of the Prime Minister:

‘Dignitaries on the dais, esteemed guests from all over the world and Yoga enthusiasts,

It is a great pleasure and privilege to participate in the 21st International Conference on frontiers in yoga research and its applications.

Vivekananda’s vision was a synthesis of a deep reading of the Indian and Western thought, and drew its spirit from our ancient philosophy and knowledge.

He not only made a unique contribution to the spiritual revival of India, he also placed our timeless wisdom before the world.

He had a deep understanding of the beauty of human diversity and spoke passionately for unity in our world.

This is a particularly special year for the science of yoga.

On June 21, more than a million people in 192 countries came together to celebrate the first International Day of Yoga.

The overwhelming global support is a mark of Yoga’s growing international popularity.

It is also a symbol of the universal aspiration for health and well being.

It reflects the shared global desire for balance between human and Mother Nature; and, peace and harmony between people and nations.

Above all, it demonstrated once again the capacity of people from different cultures to reach beyond the familiar boundaries of their lives and unite in pursuit of a larger good.

It is this spirit of unity that demonstrates the timeless science of yoga’.