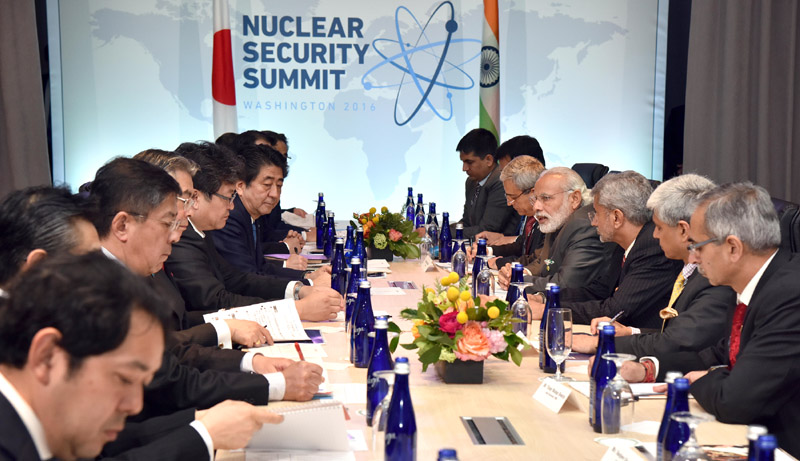 The Prime Minister, Mr. Narendra Modi meeting the Prime Minister of Japan, Mr. Shinzo Abe, on the sidelines of the Nuclear Security Summit 2016, in Washington DC on April 01, 2016.

Indian Economy Serving As The Engine Of Global Growth

Washington DC (PIB-GR-TYP-BIN): PM Modi and PM Abe met on the sidelines of NSS 2016, on April 1. In line with the Special Strategic and Global Partnership with Japan, discussions were held in a very cordial atmosphere. PM Abe thanked PM Modi for the excellent hospitality during his bilateral visit to India in December 2015. He described his visit to Varanasi as unforgettable.

PM Abe acknowledged that under PM Modi’s leadership, the Indian economy was now serving as the engine of global growth.

The two leaders reviewed the decisions taken during PM Abe’s visit and expressed satisfaction at the strong pace of implementation. PM Abe conveyed that a survey Mission will be coming from Japan in May to take forward the Convention Centre project in Varanasi. They also discussed measures to promote further trade and investment.

The two leaders also discussed the continuing threat of terrorism and the need for the International community to eschew selective approaches. They also reviewed global and regional issues.

PM Abe said that he was greatly looking forward to PM Modi’s bilateral visit to Japan later this year.