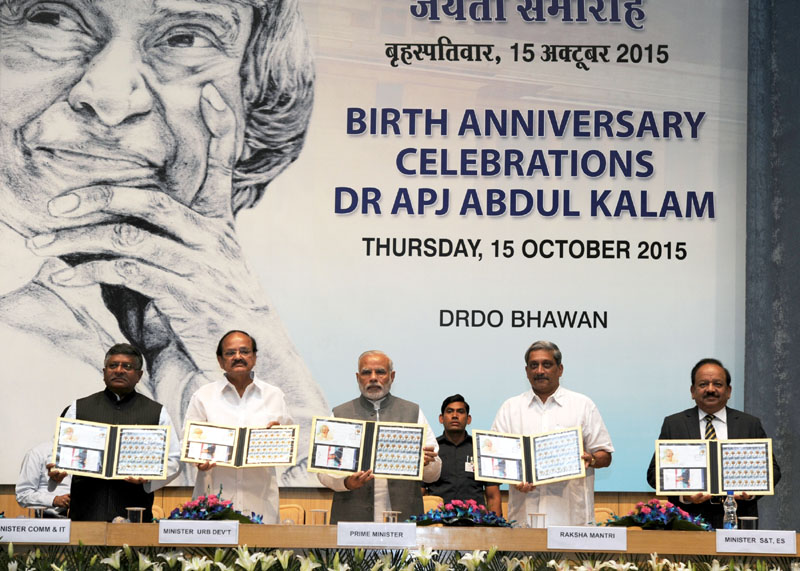 New Delhi (PIB-GR-TYP-BIN): The Prime Minister, Mr. Narendra Modi described former President Dr. APJ Abdul Kalam as one who was a “Rashtra-Ratna” before a “Rashtrapati.” He was speaking at the birth anniversary celebrations of Dr. Kalam, at DRDO Bhavan in New Delhi on October 15.

The Prime Minister said that a memorial for Dr. Kalam would be built at Rameswaram, to inspire future generations.

The Prime Minister said that while most people look for opportunities in life, Dr. Kalam always sought fresh challenges to overcome. He recalled how he worked closely with Dr. Kalam during the post-earthquake reconstruction work in Kutch.

Recalling that Dr. Kalam wished to be remembered as a teacher, the Prime Minister said that the former President was well-aware of the importance of nurturing future generations. He said that on the birth anniversary for Dr. Kalam, we must explore how we can encourage innovation in India.

The Prime Minister said that Dr. Kalam had not only risen himself, from humble beginnings to the highest office in India, but had also built great institutions, virtually from scratch. He said all of us should draw inspiration from his example.

Earlier, the Prime Minister unveiled a statue of Dr. APJ Abdul Kalam at DRDO Bhavan. He opened and witnessed a photo exhibition titled – “A Celebration of Dr. Kalam’s Life.” The Prime Minister released a commemorative postal stamp on Dr. Kalam.